Deer Hunting: What to Do When Your Summer Buck Vanishes

As summer progresses, you perform due diligence, hanging and checking cameras around food sources to keep an eye on the... 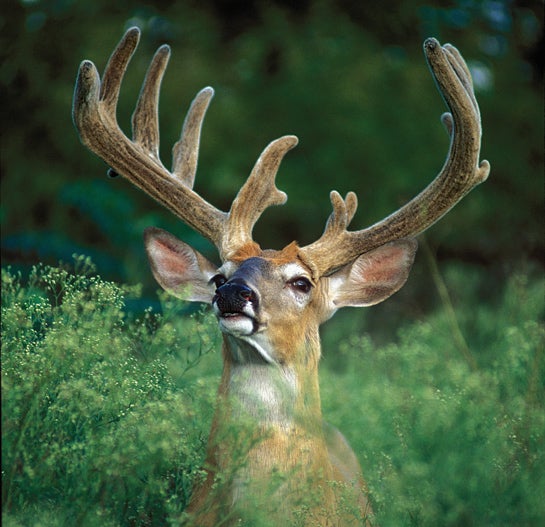 As summer progresses, you perform due diligence, hanging and checking cameras around food sources to keep an eye on the local deer population. There’s one buck that keeps appearing like clockwork, and throughout the summer you’ve watched his antlers grow until he’s become a magnificent trophy. All you’re waiting on now is the arrival of hunting season. After that, it’s only a matter of time before the buck makes a mistake and shows up during daylight. Then, just as you get his routine down pat, he vanishes. What happened?

First of all, don’t panic. You can still get your buck, but you may have to rethink your strategy to intercept him. Here are five key things to remember when a big deer goes AWOL.

He’s Still Close By
Dr. Stephen Webb of the Samuel Noble Roberts Foundation in Oklahoma has spent years studying the movements of radio-collared whitetails, and much of his data indicates that the buck you’ve been scouting is still nearby. Deer have a well-defined home range, and they stay within it virtually their entire lives.

But bucks will concentrate their activity into smaller areas within their home range, depending on the season. For example, a buck’s range may encompass 1 square mile (640 acres), but he’ll use different small portions of it on a seasonal basis. Rotate your cameras throughout other sections of your property, and you ought to find him nearby.

The Food Source Shifts
A buck’s disappearance may indicate that he’s looking for other foods. From the beginning of antler genesis in the spring until the antlers harden, bucks feed as much as possible to meet the nutritional demands required for growing that crown of bone. They change their feeding habits throughout the season based on the availability of food. Like a flyfisherman matching the hatch, a good deer hunter must be aware of what the deer are feeding on and when. In early fall, for instance, acorns drop and become an important source of nutrition for the local buck population. Closely monitor changing food sources to keep tabs on potential shifts in deer activity.

He’s on His Own Now
In the summer, bucks form bachelor groups and spend much of their time feeding and hanging out with members of the cohort. As antlers harden and the pre-rut begins, friendships begin to dissolve and bucks shift their movements within their home range. This breaking up of bachelor groups in the fall–and the subsequent sparring–can alter where a buck spends his time and where you’ll see him on your camera.

“Buck home ranges will overlap because deer are not territorial. When bucks form bachelor groups, each one is probably still using a portion of his larger annual (or lifetime) home range,” says Webb. Although the buck may not be using your property as much anymore, there is good news: The fact that you caught him on camera earlier in the year likely indicates that a portion of his home range extends onto your property, which should give you a chance to see him again, maybe even when the rut kicks in.

Something Has Disturbed Him
When a buck disappears from our surveillance photos, it’s easy to assume that the deer is onto us–but that might not be the case. There might have been a minor disturbance in the area that has caused the buck to move out of his traditional hangout. Perhaps logging has begun on a nearby woodlot, and the presence of men and machines has caused deer to shift their pattern. Even the neighbor’s dogs running loose for a couple of days could be enough to make that buck change his routine. Bucks that appear on camera are almost always within their home range, not wandering vagrants, as some hunters assume. He’s there–he’s just moved a bit.
**
The Pre-Rut is Starting**
Up until the pre-rut begins, a buck’s main priorities are growing antlers and avoiding flies that bite. The shift in daylight hours as autumn approaches means that deer become slaves to their hormones. They’re still going to be concentrated within the defined boundaries of their home range, but their habits will change.

“Movements increase and become more linear,” Webb says. This type of behavior is characteristic of bucks searching for does. It may drive us mad when we can’t pattern the buck we’ve been monitoring, but the good news is that bucks are on the move, frequenting most areas of their home range. With bucks covering such large areas, there will be a good chance of encountering a greater number of bucks during the rut–maybe one that’s even bigger than the one you were scouting in the first place.