August is big buck month–if you’re into early season scouting that is. Antlers are about 90 percent grown and now... 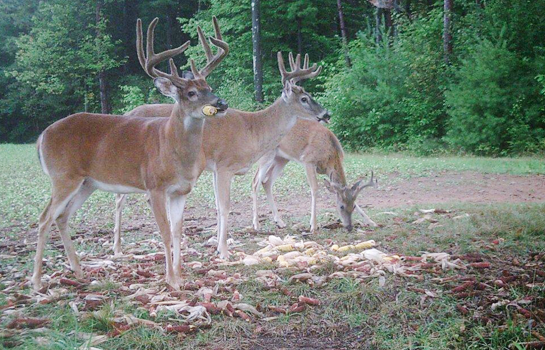 August is big buck month–if you’re into early season scouting that is. Antlers are about 90 percent grown and now is the time to begin inventorying your bucks for the upcoming season.

As shadows lengthen and evenings cool, big bucks begin their late-summer/early fall feeding frenzy in anticipation of the fall breeding season. August is a great time to spot bachelor groups of bucks prowling about in the early evening and feeding in out-of-the way corners of crop fields like soybeans and mature grains. Fresh mowed hay and alfalfa fields are also a good bet. Scouting cameras are a great way to keep an eye on what’s going on in your hunting area, but they are not the only way. A sharp set of eyeballs and some good old fashioned sitting and watching works just as well.

August is also the time of year when big bucks get reminded that humans mean danger. They are out and about because they haven’t been pressured in almost a year and they are feeling the need to feed, but they will shut down overnight if pressured. The key to early-season scouting is to keep your distance and scout low impact.

Observation blinds are a great tool for early-season scouting. They can be as simple as a few bales of hay or as sophisticated as a factory built shooting house. Vehicles, too, can be effective when used correctly especially electric hunting carts.

Here are a few tips for low-impact big buck watching:

– Get good binoculars or a spotting scope and use them

– Build blinds in the middle of the day

– If scouting from a vehicle, park in inconspicuous spots and stay in it

– Now is not the time to work on your stillhunting technique

– If you surprise deer while driving, don’t suddenly stop–slow down but keep on moving

– Don’t keep changing parking locations, let them get used to your vehicle

There are no guarantees that the deer you watch in August will be there in October, but one thing’s for sure, they will be on the feed for the next couple of months. With some seasons set to open in less than a month, get out the glass and get to work.