Deer of the Year: The Kansas King

_Editor’s Note: This story is from our annual Deer of the Year Contest. Check out the BBZ page for contest... 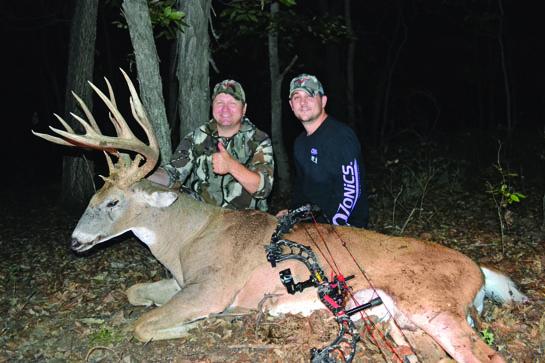 _Editor’s Note: This story is from our annual Deer of the Year Contest. Check out the BBZ page for contest details and send us a photo if you shoot a nice buck this fall.
_
Occasionally, a hunt for a giant buck is over in the blink of an eye. Then there are those times when it takes many years of dogged determination.

Sam Doss has issues, but unlike those who might prefer to hide them from friends and family, he’ll tell anyone who’ll listen.

“There are some guys who may have a problem with alcohol, or maybe women, or gambling,” says Doss. “Well, my problem is deer–big deer–and that’s really why and how I shot the biggest buck of my life last year.”

Doss’ tale of the buck that he’d come to know as Slash, due to a cut on his right ear, has taken three years to fully tell–each season full of exhilaration tempered with enough frustration and downright panic to last a bowhunter a lifetime.

“We first picked up trail-camera pictures of him three years ago,” says Doss. “Back then my fiancee and hunting partner, Cassie [Laird], and I figured him to be in the mid-160s and three to four years old. With Cassie shooting video one day, we had him at 20 yards. But we noticed that he’d broken off both brows. That took him off our hit list.”

By the second year, Slash had not only grown markedly in size, but he’d picked up a 160-class buck as a running buddy.

But for the second straight year, hope turned to disappointment when a battle-scarred Slash showed up on Halloween with snapped off tines. Doss decided once again to end the hunt for him.

“From the time I’d found his sheds that winter until he first showed up on a trail camera in July, I was absolutely scared to death,” says Doss. “And then he completely disappeared.”

Even worse, just as drought-triggered epizootic hemorrhagic disease (EHD) began to take its toll on whitetails throughout the Midwest, Slash’s running buddy turned up dead.

“We had one series of photos and then nothing,” says Doss. “It was a long summer–until September 10, when Slash finally showed. Better yet, he was using our food plots during daylight hours, and opening day was just a few days away.”

After one day on stand near the plot, the pair headed to the oak timber. A steady stream of does funnelled past their stand when Slash’s instantly recognizable main beams and hooked G2s came into view.

As Laird attempted to find the buck in the lens of her video camera, Doss swapped binos for bow, came to full draw, and let fly. Slash dropped at the shot. Sam Doss and Cassie Laird’s tandem three-year hunt was over. Yet perhaps the biggest surprise came when they walked up to the deer and came face-to-face with what deer hunters everywhere dread: ground shrinkage. Was it possible that after all this time spent staring at trail-cam photos and studying shed antlers, they could have been wrong about the buck’s rack size?

“It was crazy,” says Doss. “His body was so big that his rack looked just okay. I was thinking to myself: Could I really be that far off?”

Call it a case of simple underestimation. A bulk of 350 pounds can make any trophy rack look small–even one that nets 210 7/8 Pope and Young.