Deer of the Year: A New No. 1 Monster

Editor’s Note: This buck was featured in our annual deer of the year contest. Submit your buck this fall on... 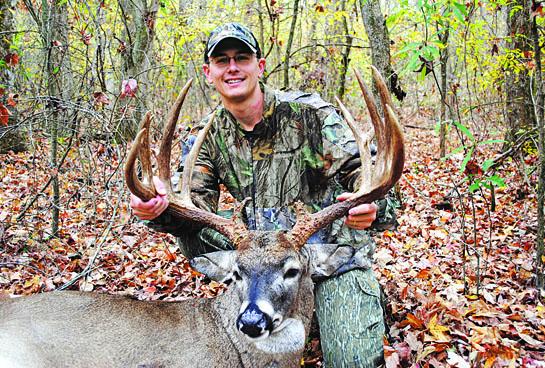 Editor’s Note: This buck was featured in our annual deer of the year contest. Submit your buck this fall on the Big Buck Zone page for the chance to be our next winner.

Like many hunters obsessed with monster whitetails, Kevin Medlin kicked off the season in the stifling heat of summer. Granted permission to hunt 200 acres of private land near his home in Olive Branch, Miss., Medlin began to set up some trail cameras amid the mixed hardwoods, thickets, and pastures. Unlike the rich deer-­hunting country to the south and east of the Mississippi River, DeSoto County does not typically produce big bucks, but three photos would change Medlin’s mind.

“He had a split G2 with plenty of time to grow,” says Medlin. “He was a great deer. It was time to get ready for bow season.”

After several unsuccessful hunts in October, work commitments kept Medlin sidelined until early November. Sensing a seasonal shift in deer patterns, the veteran hunter then swapped his field-edge stand for a sweetgum-­thicket setup.

“I needed a south wind to hunt it,” says Medlin, “and on November 11 I got it. It was about 60 degrees, so I got in and set up. I had moved my stand to the edge of the thicket, where two heavily traveled trails intersected. I had seen deer coming out of the thicket into a grove of white oaks to feed, but they were all too far to get a shot. The south wind on the morning of November 11 was just right.

“At about 6:50 a.m., I looked up from my phone after catching some movement and saw a deer. I put my phone down and looked up again and saw it was the deer from the trail-cam photo. He was about 50 yards out and walking straight toward me. He turned to my left and walked behind a few trees. A few seconds later, he was in a perfect opening at 22 yards and I let the shaft fly.”

With most of his arrow hanging out of the buck, Medlin was convinced that he’d hit a non-vital area–and then he got down. The buck, whose photo had been the desktop image on the family’s computer for months, lay dead just 60 yards away.

The mainframe 10-point with mass to spare was officially scored at 173 2/8 and now stands as the new No. 1 Mississippi typical.

“Staying off the place until the wind was right was key, but that trail-cam photo was critical,” says Medlin. “It’s the one thing that helped me keep it together to pull off the shot.”