Deer of the Year: The Payoff Buck

__ Editor’s Note: This story is from our annual Deer of the Year Contest. Check out the BBZ page for... 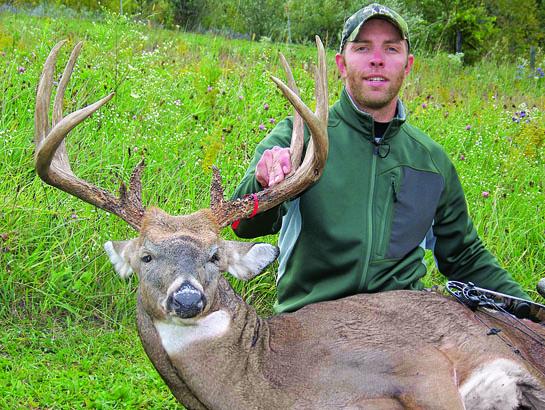 Editor’s Note: This story is from our annual Deer of the Year Contest. Check out the BBZ page for contest details and send us a photo if you shoot a nice buck this fall.

With western Wisconsin facing a record drought last year, Andrew Niemeyer used the dry conditions to his advantage. He hunts a handful of properties in the state’s Driftless Area: a bluffy, agricultural region along the Mississippi River famous for turning out massive deer.

One of the gems on Niemeyer’s list is a 60-acre ridgetop property with one food plot situated in the middle. The plot, which is surrounded by thick cover, was planted with brassica and beets, both of which are usually late-season draws. But because of the drought, Niemeyer’s food plot held the only green food in the area, and deer were hammering it.

He picked up the activity on trail cameras and saw that at least one mature buck was cruising the area. He immediately set up a stand on the food plot during the first week of the season.

“We normally don’t hunt right on the food plot–we mostly use it to keep deer in the area. In fact, we normally don’t even hunt this property until the rut,” Niemeyer says. “But on opening weekend, I’d seen hardly any deer and I was getting the itch to at least see something.”

So on September 21, Niemeyer slipped into his stand over the kill plot. A stormfront was blowing in and the wind began to swirl. Niemeyer worried that his gamble would backfire.

As the sun started to sink, two does came out to the food plot to feed. They didn’t catch Niemeyer’s scent and spook, so after they walked off, he felt slightly more confident and grunted softly a few times.

A few minutes later, a monster buck appeared. But the buck knew something was up and wouldn’t walk out into the food plot. Niemeyer grunted once more, but this time he muffled it to make it sound as though the does were farther away. The buck stomped in to 15 yards and Niemeyer made a perfect close-range shot.

“I couldn’t believe it actually worked. It usually takes me three months of hunting to take a mature buck,” he says.