Deer of the Year: The Triple Beamer

For Bill and Greg Deckling, the 2011 deer season ended as most Ohio hunters were just getting started. When their... 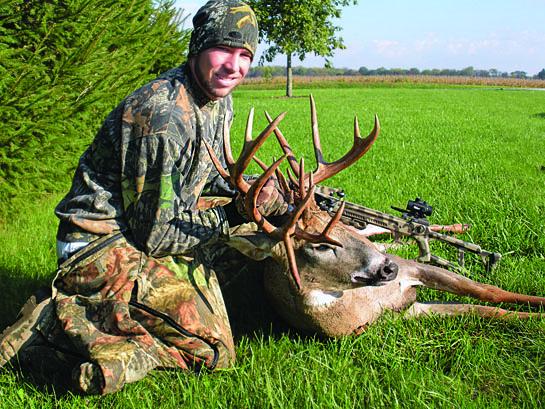 For Bill and Greg Deckling, the 2011 deer season ended as most Ohio hunters were just getting started. When their longtime hunting buddy and mentor, Tom Drake, lost his battle with cancer, the Decklings simply had no desire to get into the woods.

“Tom died on December 2, 2011,” 21-year-old Greg Deckling recalls. “It was my birthday. We all but gave up on the rest of the season after his death.”

Whether it was the lingering spirit of Drake or the relentless passion for the hunt, neither father nor son is sure, but by July of last year, they felt it was time to hit the woods again. With permission to hunt about 70 acres of farmland in central Ohio, the Decklings began their tactical placement of trail cameras. They could hardly believe the results.

“We had absolutely no idea of the quality of the deer on the property we were hunting,” says Bill. “We were just blown away. Then we started to scout the fields in the late afternoons in August, and I just swore up and down that the biggest buck of the four- or five-buck bachelor group had a third main beam. We watched them all through August, but when they went nocturnal in September, I really never thought that we had a chance at the biggest buck.”

But what is opening day of deer season if not a time for hope? And as the Decklings gathered their gear on September 29, the eve of the opener, Bill reached for a bit of additional assistance.

“That night Dad went to the barn and came out with an old camo Horton Yukon crossbow,” Greg says. “It was Tom’s old bow–the one he had used during his many years of hunting with us.”

Father and son went over their flight plan one last time the next morning.

Amid the pre-hunt excitement, young Greg had forgotten to purchase his buck tags, drawing instant admonishment from his dad.

“Might as well go back to bed,” Bill told his embarrassed son. “If you’re going to do this, it’s going to be the right way.”

He went back to bed, but Greg certainly didn’t go back to sleep, kicking himself until it was late enough to drive to the store to pick up his tags.

“I was just hoping like heck that I didn’t miss my chance,” he explains.

By four that afternoon, the Decklings were settled in ladder stands 100 yards apart and just off the edge of a CRP field.

“I didn’t see anything until 5:30, when a nice 9-point came by, but he just never did get close enough for a shot,” says Greg. “I’d only taken one other small 8-pointer previously, so I would have shot him.

When the buck turned his gaze for just an instant, Greg raised his crossbow to gain a sight picture, only to realize that he’d forgotten to power up his red dot.

“My heart was beating out of my chest and I was shaking,” he says. “Somehow, some way, though, that buck had gotten a cornstalk stuck in his antlers. When he shook his head, I was able to flip on the red dot, saw a little shadow behind his shoulder, and fired.”

A spotty blood trail led father and son out into the alfalfa field before turning back into the woods. The arrow, which passed through the buck, smelled slightly of paunch.

“I could see where he had stopped,” the elder Deckling says. “We kept going, and when he reached a thicket, he opened up.”

Just 10 yards farther, Bill could see the buck’s huge rack sticking up out of the leaf litter. He was down.

“I got pretty emotional then,” he recalls. “I about tackled Greg.”

The Decklings’ buck netted 200 inches, according to the Buckeye Big Buck Club scoring system. It had an estimated live weight of 220 pounds.

Though father and son deserve kudos for their teamwork on Outdoor Life’s Deer of the Year, neither will accept credit.

“Tom Drake was out there with us,” says Bill Deckling. And son Greg is quick to agree.

“Tom put that cornstalk in that buck’s antlers–I know he did,” he says. “Had he not stopped to shake it off, I would never have gotten the shot.”