Whitetails grow old anywhere they find food and shelter. In much of America, that means near subdivisions and strip malls.... 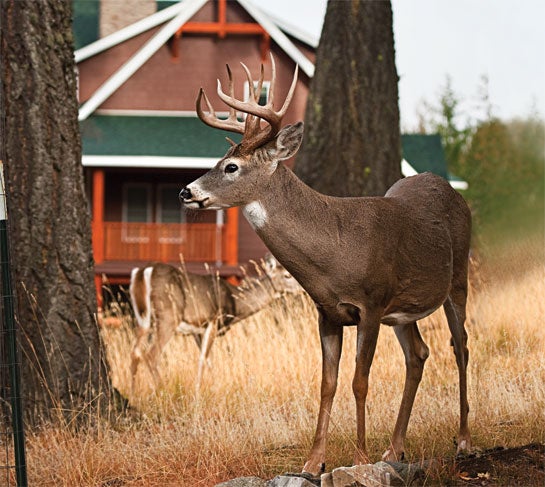 Whitetails grow old anywhere they find food and shelter. In much of America, that means near subdivisions and strip malls. Hunting them in such close proximity to people requires a special set of skills.

Consistently encountering bucks in the suburbs requires the analytic talents of a surveyor, the people skills of a realtor, and the stealth of a ninja. But the place to start is with a bird’s-eye view of this intensively settled land, and with the ability to interpret habitat from a whitetail’s perspective.

Suburban bucks often spend their days in pockets of cover, and they use familiar routes to access food (often a homeowner’s landscaping). Because the small, densely populated tracts of the suburbs don’t give hunters the ability to effectively scout properties or hang trail cameras, use Google Earth (or whichever mapping option you prefer) to look for travel corridors, bedding areas, and sanctuaries. You’ll still have to get access, but this satellite view will give you a targeted approach to finding quality suburban hotspots.

DEER PATHWAYS
During the early fall, until the rut disrupts their behavior, whitetails are deeply committed to routes that connect feeding and bedding areas. They leave their hiding spots and use power-line rights-of-way, riparian corridors, and greenways along major highways to navigate around subdivisions and office parks. These deer throughways should jump right off the map at you. Get access to a small section of a corridor and hang a stand. Don’t worry about finding buck sign–all you need are deer trails wending through cover.

Quick Tip: When I find a suburban property I want to hunt, I carry my bow (without arrows) to the homeowner’s door and knock. People who don’t hunt often find bows intriguing. They feel confident that you are a serious hunter, and they know immediately what you want to talk about.

BUCK POCKETS
Before the rut prompts bucks to seek estrous does, you have to get near their suburban bedrooms. Look for wetland areas, overgrown fields, and large brushy ravines between housing developments. Scout the edges for rubs in September. These will tell you where bucks are exiting near dark to feed on suburban gardens and shrubs, and clusters of rubs will show you where a buck is staging before leaving the trees. Hunt just inside the cover.
Quick Tip: Ask a local property-tax assessor which of your neighbors might let you hunt. These folks often make it their business to know the properties in an area.
**
SANCTUARIES**
Look for concentrations of “No Hunting” signs, and ask around about property owners who don’t allow hunting. If you find a large property, or even a cluster of smaller tracts, where access isn’t permitted, then you might have a spot that holds deer–maybe even mature deer. Landowners who prohibit hunting often don’t realize they’re creating a safe zone, which deer use by day but troop out of at night to give local farmers trouble and landscapers business.

Quick Tip: Farmers near subdivisions lose huge amounts of crops to maurading whitetails. They are often eager to point hunters to the routes deer are using between sanctuaries and groceries.