Whitetail season is just barely underway in most parts of the country, but smart bowhunters are already starting to take... 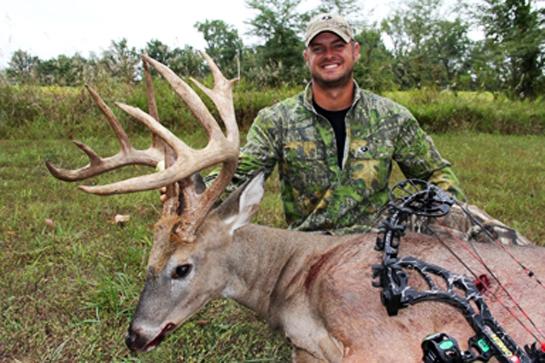 Whitetail season is just barely underway in most parts of the country, but smart bowhunters are already starting to take some slammer bucks.

Drury Outdoors Team member Brandon Jennnings sent photos of this 171 3/8-inch Missouri buck shot on September 15 in to the Drury site. Jennings nicknamed this buck Django and had been recording pictures of him all summer. With some good trail camera work Jennings was able to pattern the big buck and find out where he was bedding and feeding. When the mercury dropped 20 degrees, Jennings knew the deer would be moving early and sure enough he spotted Django coming his way at about 6 p.m.

“My heart was beating out of my chest, then he finally made his way to 25 yards and gave me a quartering away shot and the PSE drove the Rage Extreme home and we found him piled up after a short 50-yard tracking job. What a great way to start off the year with my biggest buck to date…”

Use Jenning’s story as a little motivation to hunt smart and lock down a mature buck that’s still on his summer pattern this month. When the conditions are right, move in and kill him.
_
For more great deer stories and photos, check out Drury Outdoors on Facebook._