More on Calling the Rut: The Numbers Don’t Lie

My last blog warned about overreacting to some of the more common soft signs of the whitetail rut. It also... 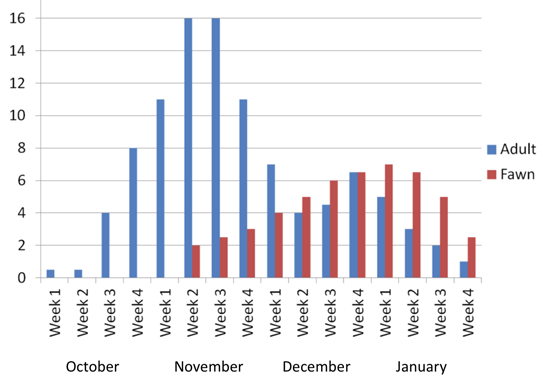 My last blog warned about overreacting to some of the more common soft signs of the whitetail rut. It also mentioned that I had observed an honest to goodness deer breeding party a week ago.

That raised a few eyebrows among the readership that asked: “How can you observe a breeding party one day and claim the rut is not on the next?” Let me explain, but first you need to Google the following: normal curves, histograms, and data outliers because the answer lies in the numbers and the data don’t lie.

Crunching Numbers
The biological research on when whitetails breed is quite clear. Study after study demonstrates that the majority of fawns are typically conceived sometime from late October to late November to early December. This is determined by aging fetuses in pregnant does. Breeding generally peaks around mid-November. The numbers hold for roughly 90% to 95% of whitetail country.

Conception data are typically presented in some sort of graphic arrangement which generally looks like two humps side by side. The right side of the distribution lower and tails off more gradually than the left side. A statistician might refer to it as a bi-modal distribution flattening on and tailing off to the right. The conception distribution graphs that include dates typically show conception beginning sometime in October (early outliers) peaking in mid-November and tailing off into December. More area under the curve, means the more conception data points occurred.

The above histogram was provided by the Quality Deer Management Association (QDMA) which keeps pretty close tabs on breeding activity across whitetail country. The second hump and gradual tail off is attributed to failure to conceive by some does in November (a second heat 28 days later) and some doe fawns experiencing their first estrus (as they reached breeding maturity).
**
Real World Application**
So what does this have to do with my seeing a breeding party last week? I observed a doe that came into heat a month or so before the majority of does in the area would come into heat. She was more than likely the only doe within miles to be in heat. Fast-forward 2 months and there would be hundreds, even thousands of estrus does running around (rut on!). Fast-forward 3 months and we would most likely be down to a handful (rut over).

That’s why you don’t hunt the rut in the middle of September even though some soft signs of the rut are present and the occasional doe may even be in heat. Hunt food in the early season until the deer in your area become rut driven.

Basically, calling the rut is all about knowing what rut markers to pay attention to and framing your observations in a data-driven environment. You have to think numerically, and try not to overreact to outliers, or aberrations of expected rut behavior. The breeding party I observed last week should be cast aside as interesting, but relatively unimportant in the big scheme of calling the rut. It’s a game of percentages and paying attention to what the data are telling you.