We interviewed biologists and deer managers from all 50 states to help you figure out what your fall’s mule deer,... 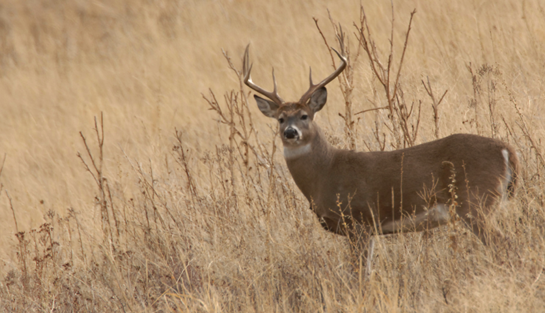 We interviewed biologists and deer managers from all 50 states to help you figure out what your fall’s mule deer, whitetail, and blacktail seasons will hold in store. Here’s our regional report. Stay tuned for our state-by-state breakdown for the 2013/2014 deer hunting season.

Midwestern Regional Report
Whitetails in Midwestern states were hit hard in 2012 by epizootic hemorrhagic disease (EHD), a deadly virus transmitted by small biting flies (or midges). There is no cure for the disease and it hasn’t been around long enough in the Midwest for deer to have developed resistance. States like Michigan and Nebraska experienced record EHD-related deer losses last summer, wiping out pockets of deer in local areas. This has prompted state agencies to reduce the number of hunting permits in many Midwestern locales, including Iowa, Missouri, and Nebraska.

But another mild winter should help deer bounce back within a couple years. While summer drought reared its ugly head again in the region, conditions haven’t been nearly as dire as they were in 2012. Whitetails have had more food available, including a good apple crop, and virtually no EHD outbreaks have been reported thus far. All these factors will enable deer to go into the fall in good shape, albeit in fewer numbers in the western part of the region. Still, hunters should see plenty of deer in the Midwest, with mature bucks congregated in areas with relatively light hunting pressure, as usual.

While much of the Midwest has ample public hunting land, there are areas where hunting access is hard to find.

“Only 1.5 percent of Iowa’s land is open to public hunting,” said Tom Litchfield, Deer Project Biologist for the Iowa Department of Natural Resources.

Northeastern Regional Report
Another mild winter and few problems with diseases should bring another good hunting year for those in the northeastern states. From Maine to Maryland, state biologists and deer program leaders predict hunters will bag a similar number of deer to 2012, when states like Connecticut and Delaware had record harvests.

The only wrench thrown in the works is a marginal oak crop this fall, affecting the amount of food available to whitetails. All hunters know that deer thrive on acorns, so this fall they’ll have to do without in many areas, marking the second consecutive year of a poor acorn crop. The apple crop however should be a boon to early-season hunters.

One of the big draws for hunters in the northeast is the high percentage of mature bucks roaming the fields and woods of most states. Hunters in states like Conn. And N. H. are bagging plenty of bucks, and half of them are 2-1/2 years old and older.

While northeastern states don’t have as much public land open to hunting as other regions, hunters can still find their fair share of decent-sized bucks if they’re willing to work for them. Be sure to carefully review the deer hunting regulations in the state you’ll be hunting in, as many wildlife management areas (WMAs) have antler point restrictions in place, generally requiring a buck to have a spread of 14 or 15 inches.
**
Southeastern Regional Report**
While the continental U.S. as a whole is only about six percent above its normal rainfall this year, southeastern states have been deluged. Through the month of June, Georgia received 34 percent above normal rainfall, according to the National Oceanic and Atmospheric Administration’s National Climatic Data Center. Both of the Carolinas were about 25 percent above normal.

In a region that depends on plenty of sunshine to grow crops, much of the Southeast has received far too much rainfall this summer. Standing water has made cornfields look like rice paddies, and farmers predict about half of their crops have been ruined by the rain.

Despite the overabundance of the wet stuff, deer hunters in the Southeast can expect a season similar to last year. Hemorrhagic disease (HD) took a break this year, with only isolated instances being reported throughout the region.

The southeastern region provides plenty of public hunting land. North Carolina alone has over 200,000 acres open to deer hunting. The timing of the rut varies considerably throughout the region, so it’s best to check with a local deer biologist in the area you’ll be hunting this fall.

Southern Regional Report
Finally – the rains came to the South in 2012, bringing much-needed respite from a multiple-year drought that’s ravaged states like Oklahoma and Texas for years. This is good news to whitetails with southern accents.

“Most regions of Texas received some spring rains to ‘green up’ the brush and produce a few weeds that provided adequate forage to support deer populations and help out with antler growth and fawn rearing,” said Alain Cain, whitetail deer program leader for the Texas Parks and Wildlife Department.

Farther to the east, rain has been more plentiful, particularly last spring and early summer, so deer have been able to pick and choose from a cornucopia of native browse and agricultural crops. Take for example Louisiana. Except for an influx of feral pigs, bayou deer have been living well for several years.

Despite the drought, wild hogs and a new strain of hemorrhagic disease to contend with, whitetails are a resilient species. They’ve done well in the South, with population levels in states like Mississippi and Texas at the highest they’ve been in decades.

Expect more good deer hunting in the South in 2013, where Mother Nature makes the task of determining the timing of the rut harder than doing the Texas two-step on one leg. Other than the Lone Star State, most southern states provide a ton of public hunting land for deer hunting. Head to areas where agriculture and water (rivers, streams) meet to find the good deer numbers, and a good opportunity to bag a big buck.

Western Regional Report
Although a seasonal drought has gripped all western states but Washington, whitetails are holding their own. And last year’s epizootic hemorrhagic disease (EHD) outbreak in Montana didn’t make a repeat performance in 2013, allowing deer in Big Sky country to rebound a bit. Whitetails in states like Colorado and Wyoming are also in good condition, so western whitetail hunters can expect a hunting year similar to 2012.

The same can’t be said for mule deer. The species doesn’t seem to recover as quickly from drought, disease and wildfires as their whitetail cousins, so state wildlife agencies will again be prudent in the number of deer permits they make available this fall. Most western states had a relatively mild winter last year, which should help mule deer populations increase.

If you’re looking for a place for a do-it-yourself deer hunt, then “Go West, young man!” should be your motto. Each state has oodles of public land available, providing ample hunting opportunities for young and old alike.