Where Have All the Deer Gone?

Our phone’s been ringing for the past week with reports of missing deer. Seems like every hunter and his brother... 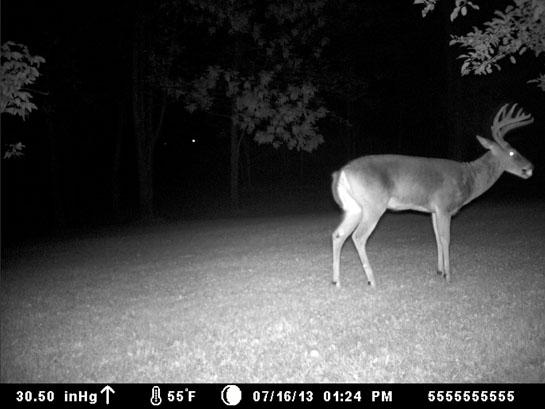 Our phone’s been ringing for the past week with reports of missing deer. Seems like every hunter and his brother have been busy since the first hay cutting keeping an eye on the biggest bucks in their neighborhood and suddenly they are gone. Somebody poach them? Too much scouting pressure? An outbreak of EHD? How about none of the above?

All summer long we have been talking about the late-summer/early-fall feeding frenzy that whitetails exhibit. Big bucks are busy packing on the pounds for the upcoming rut and winter. Since the first hay cutting, they’ve been out in the bean and alfalfa and clover fields chowing down on fresh growing greens. But we’ve also been talking about mast and how important it is to whitetails; and how a good mast crop will trump a green field any day (or night). There’s nothing like a good mast crop to attract a crowd of whitetails.

About two weeks ago apples started falling, acorns started hitting the ground. Berries and grapes and all kind of sweet treats also started to show. Bucks, which had been feeding in open fields, suddenly were headed for the peace and quite of an acorn flat or an abandoned apple orchard in an out-of-the-way place. Why would a mature buck munch on alfalfa out in the open where anyone with a truck and pair of binoculars can keep track of him when he can chow down on acorns back in the woods?

As we’ve mentioned previously, mast can be broken down into two categories: hard and soft. Soft mast is your basic fruits and berries. Most soft mast is sweet (at least to a deer) and have the ability to sugar-hook a buck in a hurry. They get used to finding a half dozen or so fruits on the ground every time they pass near an apple, pear, peach, plumb or persimmon tree and get the sweet treat habit in a hurry. These carbohydrate-packed treats help pack on the pounds in a hurry and deer find them irresistible.

Hard mast is comprised primarily of nut species like acorns (white and red), hickory nuts and beechnuts. Of the three, white-oak acorns are generally the most preferred and sought after. A white-oak flat with a bumper crop of falling acorns will draw deer from miles and they won’t leave them alone until the last one is cleaned up. Beechnuts can be a pretty good draw as well with hickory nuts the least preferred. As some of us know only too well, nuts are loaded with fat producing carbohydrates and are a major source of weight gain and fat production (necessary for wintering) nutrition for whitetails.

No, the poachers didn’t shoot the buck you’ve been watching all summer. They’ve succumbed to the magic of mast (just like they do every year). Smart hunters know the sudden disappearance of whitetails from their summer feeding fields is nothing more than a shift in food preferences. They will be heavy on the feed until the rut kicks in a month or so. The trick is to know what they are feeding on when hunting season kicks in a week or two. That’s why we spent all summer mast watching and food plot planting.