Photo by John Eriksson/Images on the Wildside When it comes to hunting the rut, sportsmen far and wide hang their... 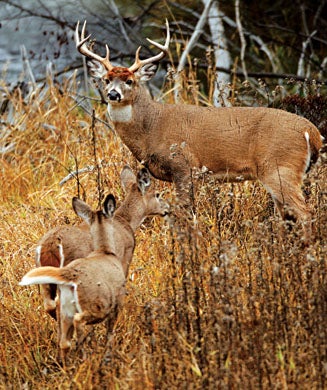 Photo by John Eriksson/Images on the Wildside

When it comes to hunting the rut, sportsmen far and wide hang their hats on a lot of old information. But recent whitetail research allows us to reevaluate some of these misconceptions, and the new knowledge will help us hunt smarter.

1. Small Bucks Don’t Get to Breed Does
The myth stating that only big bucks breed does has been debunked in the pages of Outdoor Life before. Because of their size and age, younger bucks are at a disadvantage when battling older bucks for does. However, there are a number of young bucks that breed does every year.

New research indicates that subordinate bucks bred does in 5 out of 6 trials. In general, the research available indicated that social dominance did not have a major impact on breeding frequency.

2. Bucks Will Cover Miles in Search of Does
It’s easy to understand how this myth came to be. For years, hunters have scouted and hunted hard until the rut, only to have that one big buck seemingly vanish forever. In reality, you’re hunting within the confines of a buck’s home range, which varies widely based on deer density and habitat. But most properties are smaller than a single buck’s range. For the rest of the year, that buck may be in hiding, but the rut causes him to drop his defenses and lose his affinity for traveling under the cover of darkness.

Bucks may travel slightly outside their home range, says Dr. Stephen Webb of the Samuel Roberts Noble Foundation, but it’s a myth that they range miles and miles from home. Each buck is an individual, and movement patterns vary from one deer to the next.

3. The Moon Affects the Rut
In a journal article that appeared in The Wildlife Society Bulletin in 2012, researchers reported that does came into estrus over a period of 30 to 40 days, with a standard deviation of 12 to 13 days, and that moon phase had no appreciable affect on the timing of this.

4. Bucks Stop Eating During the Rut
With the level of caloric output expended during breeding, bucks would actually die if they stopped eating. According to David G. Hewitt of the Caesar Kleberg Wildlife Research Institute at Texas A&M University-Kingsville, bucks eat protein-rich foods in the fall in anticipation of the rut, and they continue to feed during the rut. You shouldn’t assume that all a buck is doing is chasing does.

5. Rattling Works Best During the Pre-rut
In research conducted by Dr. Charles DeYoung of the Caesar Kleberg Wildlife Research Institute, the greatest response rate to rattling was during the rut and the lowest was during the pre-rut.

6. The Phases of the Rut Occur in Order and Last About a Week Each
Rutting and estrous cycles are far more fluid than once thought. It’s impossible to pinpoint the exact times of pre- and peak rut. The key is to be in the woods when the does are in estrus, which is when bucks will be on the move.

But, as the research indicates, there is a wide variation in estrous periods. The rutting activity in one area will change depending upon the number of does that happen to be in heat.

7. The “Second Rut” is When Young Does are Coming Into Estrus
The study mentioned previously indicated that does had a wide range of estrous periods. The data also showed that while 2 ½-year-old does came into estrus earlier than 1 ½-year-olds, 3 ½-year-old does seemed to come into heat later than 2 ½-year-olds.

In short, there’s no evidence in this study suggesting that younger does always come into estrus after older ones.

8. It’s a Good Idea to Hunt Over Scrapes
The notion that hunting over a scrape will put you in position to kill a big buck has been debated for years. Like tracks and rubs, scrapes can serve as an indicator of the presence of deer–but only if they’re fresh. If you are in an area with a lot of scrapes, and at least one of them has been tended recently, this is a sign that you are hunting on the home turf of a buck.