Whether you think of it as the best of times or the worst of times to take a mature buck,... 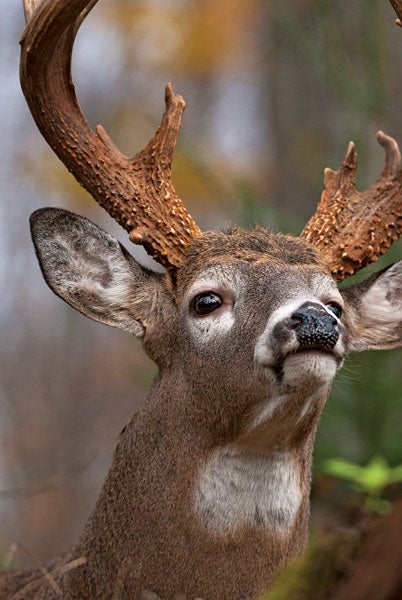 Whether you think of it as the best of times or the worst of times to take a mature buck, one thing is certain: You will hunt the rut. The challenge lies in coming up with a game plan that will work. As the rut peaks, we can expect to see wide-racked bucks chasing does around pastures at first light with wild abandon, or brazenly crossing open fields at noon, seemingly oblivious to the possibility of danger. They may look to be unpredictable, but you can still plan a lethal ambush.

Think Like a Rutting Buck
Does and fawns generally feed low and then bed in higher elevations during the middle of the day. You may find bucks sniffing around the fields at first light for a doe nearing estrus, but once does have left the open areas, the bucks will be up on ridges looking for them. Sure, you could set up a treestand on one of the trails leading up the hill and away from the field.

However, a more logical plan would be to do just what a lonesome buck does to maximize his chances of hooking up with a hot doe right after first light–cross-check trails leading up the hill away from morning food sources by sneaking along ridges that run perpendicular to doe trails. For a buck, this is a quick way to determine if there are estrous does in the immediate vicinity.

So where do you put your stand? Look for fresh rubs along the ridgeline routes that bucks prefer, typically where they enter and exit the woodlot. A fence line, a narrowing, the nearest piece of thick cover, and a brushy finger are all good places to look for sign.

Find the Tucked-Away Apples
Bucks love apples–just ask any orchard owner in deer country. But the apple orchards you want to find are wild, left to the vagaries of nature and well hidden from man. Although they seem abandoned, the scrubby trees are patrolled by bucks looking for estrous does.

My favorite apple orchards lie between a primary food source, such as an alfalfa lot or bean field, and a doe and fawn bedding area. These orchards often function as transition zones, and are thus hot in the morning when does are heading out to bed down, and again in the evening when does are on the feed once more.

To locate these grown-over orchards, study topo maps and confirm your find with some ninja-like scouting trips.

A few years ago, I watched a buck enter an orchard but not come back out. Curious, I did some sneaking, and caught a fat 9-pointer bedded down on a knoll above the orchard where he could see if any does entered the orchard to feed. I arrowed him at 21 yards in his bed.

Hunt Water-Sources
Although they do not generally need to go to water on a daily basis, whitetails will visit a clean farm pond or running creek if it is nearby. Indeed, a quick look at the water supply around your hunting grounds will probably turn up an abundance of deer tracks in the soft mud.

Several seasons ago, I stumbled upon a spring near the top of a steep mountain in a big-woods area near my home in Upstate New York. There were two or three pools of bubbling water, and the wet ground nearby was covered with deer tracks. I also found several old scrapes and rubs in the immediate vicinity.

Four of my friends and I have hunted it off and on, and together we have tagged nearly a dozen whitetails there over the years. Now I make it a point to check out any clean water source tucked away in heavy cover. The water attracts the does, and during the rut, the does attract the bucks.