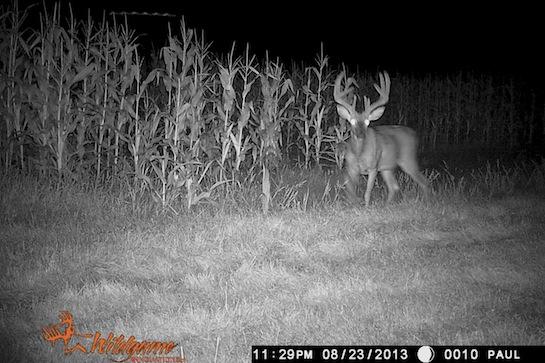 Outdoor Life reader Paul Erola, 34, took this big 9-pointer on his family’s farm in Itasca County, Minnesota earlier this month. The buck rough-scored 145 inches and weighed 210 pounds dressed. Erola attributes some of his early-season success to luck, but his hours of hard scouting and careful preparation certainly didn’t hurt either.

The buck first appeared on Erola’s game camera in late August. Erola immediately redoubled his scouting efforts by setting up several more cameras and continuing to inspect the trails. But the area had received little rain and good tracks were difficult to spot on the dry ground. Then, more than a month later and just two days before his hunt, another camera finally captured the 9-pointer in the same cornfield. Erola still wasn’t sure which trails the buck was using, but he was eager to hunt the field. When the wind changed in his favor, Erola headed for his stand in the afternoon of Oct. 1.

From his perch along the treeline, Erola watched several does browse in the freshly cut corn. At one point, a doe and her fawn walked right beside his stand, but a swirl of wind picked up his scent and she busted him. Erola didn’t expect to see anything for the rest of the night. Later that evening, however, a 10-pointer and a small 6-pointer entered the field 40 yards from his stand.

At 6:30 p.m., Erola was still watching the two bucks when he heard movement nearby. He turned around and spotted a big buck walking through the brush. “I couldn’t believe it,” Erola said. “A quick look and you could see the split brow tine pretty easily. I had to control my emotions as much as I could to get a good shot on him.”

Exchanging his binoculars for his bow, Erola waited as the buck moved through the undergrowth. When the bruiser stepped out at 35 yards, Erola fired.

The arrow struck vitals and the buck ran about 70 yards before collapsing out of sight in the tall grass at the field’s edge. Erola waited 20 minutes before climbing down. “I put a great double lung shot on the deer and I didn’t have any doubt it would be a short recovery,” Erola said. “I walked up behind him and you could just see the horns sticking out above the grass. I just had to jump up and down a little bit.”

Erola took a few photos and called his dad, who immediately came out to help. “I was excited to see this deer in person after all the daydreaming I had done about it,” Erola said. “With the scouting and preparation I did, I finally got the dream to come to reality.”