Deer Hunting: When a Whitetail Chase is Really a Chase

Since early September we have been receiving reports of bucks chasing does. Does this mean the rut is on? Hardly!... 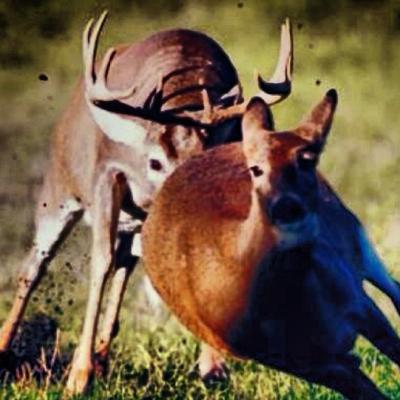 Since early September we have been receiving reports of bucks chasing does. Does this mean the rut is on? Hardly! It means a buck will chase a doe about any time he feels like it. The more testosterone he has in his system, the more he will feel like chasing. It also means, we need rethink the common belief that a buck chasing a doe is a sure sign of “rut on” because, as the saying goes, all chases are not created equal.

As summer turns to fall and days begin to shorten, testosterone levels begin to rise in whitetail bucks. Testosterone is the male hormone which basically drives a buck to reproduce. The testosterone machine kicks in sometime around Labor Day and gradually increases production until about mid-October. Testosterone is what makes a buck act like a buck and drives him to make all those scrapes and rubs. It leads to sparring matches and the occasional fight. This is all to establish dominance and sort out who will do the breeding and who will do the watching.

It is also what causes bucks to chase does and leads hunters to inaccurately call “rut on.”

After years of whitetail watching and reviewing thousands of field reports from fellow whitetail watchers, we believe there is a real difference between a buck chasing a doe because he is feeling his oats and a buck chasing a doe because he has a nose full of estrus pheromones telling him that she is available for breeding. The former occurs primarily due to the effects of testosterone on the bucks system (especially young bucks) the latter happens when testosterone meets estrus.

Testosterone Only
Testosterone chases happen all the time. A young buck is feeding in a field full of does, suddenly his hormones remind him that he is a buck; he drops his head and heads for a doe, or fawn, or anything he happens to feel like harassing. The object of his interest scoots out of the way and the whole thing is over in 5 seconds. The does goes back to feeding and the buck wanders off wondering what just happened. Some chases last longer and sometimes older bucks will take a run at a non-estrus doe but the result is still the same, nothing gets done and the whole thing is over quickly. Chases like these are false positives of the rut to come. They increase in frequency and duration as the rut approaches but they are still driven by bucks’ hormones not does’ hormones.

When Testosterone Meets Estrus
Estrus driven chases are another matter. For starters, he won’t take “no” for an answer, at least not without giving it a hell of a try. He’ll pursue a “hot” doe until she eventually quits fleeing and allows him to eventually breed. Or, he’ll run into another doe that interests him more. About the only thing that will stop him is a bigger, tougher buck or an arrow through the ribs. Occasionally the doe can outdistance him or give him the slip, but estrus driven chases are intense events and complete with heaving sides, lolling tongues, frothing mouths, and all kinds of crashing and smashing. They can last for days and can cover many miles. Once you see one, you will never again confuse a testosterone only chase for the real deal.

The Hunter’s Rut
This is the chase we are looking for as hunters. We consider it to be a key rut marker and a sure sign (provided you see other rut markers at the same time) of what we like to refer to as the “hunter’s rut.” This is when you need to be in the woods all day, every day until things cool down. Estrus driven chases can occur anytime a doe is approaching estrus which means anytime from September through December but the majority of them will occur just prior to the “biological rut,” which occurs across most of the whitetail world sometime around mid-November.

The bottom line: See a handful of estrus chases in a weekend and you had better stay in camp and call in sick. The “hunter’s rut” comes but once a year and you want to be there when testosterone meets estrus.