How to Hunt Whitetails this Weekend: Find the Right Forage

My son Neil and I have been documenting whitetail deer behavior through the fall hunting seasons for the past 25... 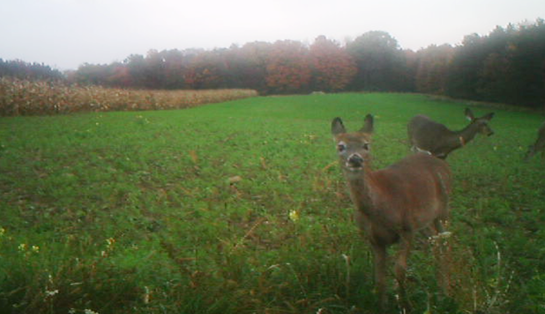 My son Neil and I have been documenting whitetail deer behavior through the fall hunting seasons for the past 25 years on our western New York properties. We live with deer and watch them every day of the year. Like most hunters we pay particular attention to whitetail behavior in the fall as we document and track the “feed-breed-feed” cycle. The cycle typically begins in early fall (September and October) and runs through December. Over the years we have developed a network of thousands deer watchers who do likewise and report regularly.

Each week on the BBZ Blog we’ll report our findings and give you insider tips on how to hunt your whitetail woods.

Deer Activity
All summer long we have been watching whitetails working our crop fields and food plots. As the weather turned cool their feeding activity increased and in late summer the doe groups were joined by their fawns. A whitetail consumes roughly 6 pounds of food per day in 4 to 6 feeding sessions. A typical buck will gain 20 percent of his weight from mid-September to mid-October. Bottom line: Until the rut activity begins to kick in, it’s all about food.

As September became October, feeding intensified. Right now they are busy packing on the pounds and are feeding heavily on just about anything they can fit in their mouths. They go from green fields, to apples, back to green fields while taking a side trip to visit our standing corn. Of late, we have seen a marked decrease in food plot use, which just happens to coincide with the acorn drop (this seems to happen every year). Acorns, with their high fat content trump just about anything else deer feed on.

On-Stand Observations
Our season opened Tuesday with a pleasant, mild-weather evening sit. I saw one bear, 5 does, 4 fawns, and 2 yearling bucks. They came early and fed hard for an hour or so before wandering away. They were working the clover pretty hard with the occasional nip of a weed or leaf at the plot’s edge. Most of the deer at Kindred Spirits property have been on green plots thus far. They are working the apples on their way in and out of the plots. Our apple trees are loaded so there is no telling where they will show up for a little apple action. The acorn crop here on our Kindred Spirits property is a little light this year with about 30 percent of the trees bearing. And most of the acorns are still on the trees.

Neil didn’t get out on the opener, but over the last two weeks, he has been noticing a shift from green plots to the woods on his farm. It seems like the deer have found some patches of acorns and acorns almost always trump green plots. Roughly half the deer are on his plots that were there a few weeks ago. A bumper crop of apples have also pulled them off the plots.

How to Hunt This Weekend
Hopefully you have done your homework and located your food sources long ago. So, tiptoe into position and start hunting the food. Right now, whitetails are totally consumed by the need to feed and should continue that way for some weeks. You might be seeing scrapes and rubs and licking branch activity but that is to be expected from Labor Day on across most of whitetail country.

It’s impossible to tell which foods they will be on without being there but almost anything green and tender will draw a crowd this time of year as will most crop fields. It is a little early for field corn to get a whole lot of action but don’t rule it out — especially if it is the only game in town. Falling fruit is a great draw this time of year as are falling leaves and late-season berries. And of course, there are always acorns.

The early season is a good time to tag a big buck. Most will still be patternable for a while. But this feeding phase doesn’t last long so tread lightly and strike swiftly. A week or so of hunting will change the rules in a hurry and big bucks will soon head back to their vampire ways, at least until the rut starts ramping up.