Big Bucks Turning Up in Virginia

Virginia is one of the east coast’s hottest states for hunting whitetails, and hunter Ricky Grubbs is taking advantage of... 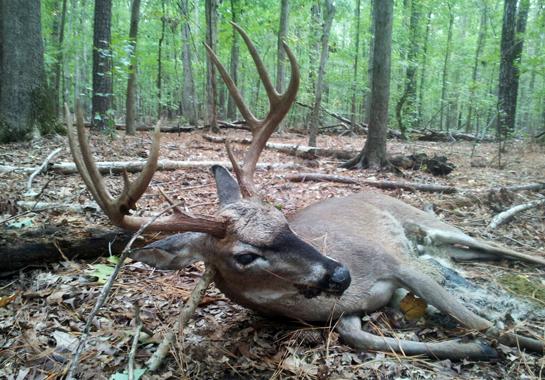 Virginia is one of the east coast’s hottest states for hunting whitetails, and hunter Ricky Grubbs is taking advantage of it. Last month Virginia Whitetails posted photos of Grubbs’ success in the stand, which includes a 9-pointer from this season and a massive 182-inch bruiser taken in 2008 (below). Both bucks were harvested in Surry County, Va.

On Oct. 5, the the opening day of bow season, Grubbs decided to hunt an oak thicket that had proven lucky in previous years. He hit the stand well before first light, setting up on a trail near the oaks and the back side of a cut cornfield. At 7:30 a.m. Grubbs heard something moving through the trees to his left. “I knew a deer was coming but I didn’t know what it was until he got within sight,” Grubbs said. “I could see through the trees and I thought he had horns. Then I thought, ‘Man that’s a nice buck.'”

By the time the buck appeared, Grubbs was already on his feet. The buck walked behind a tree at 20 yards and Grubbs drew back. When the buck stepped out, Grubbs halted it with a grunt. “He stopped and looked and I let the arrow fly,” Grubbs said.

The buck ran out of sight, but Grubbs heard it crash and knew he’d made a good shot. He waited 30 minutes before following and found the buck just 60 yards away, piled up from a double lung shot. Grubbs had placed a couple of game cameras in the area, but they’d never captured photos of this particular buck.

“I was over-excited,” Grubbs said. “I’ve killed a couple big deer and of course your emotions run high when you harvest a nice buck. You put all this hard effort and work into into finding a spot to hunt. And especially for the first day.”