How to Hunt Whitetails this Weekend: The Rut is On!

We’ve waited all year for this weekend and we’re making the official Outdoor Life call: The rut is on! Reports... 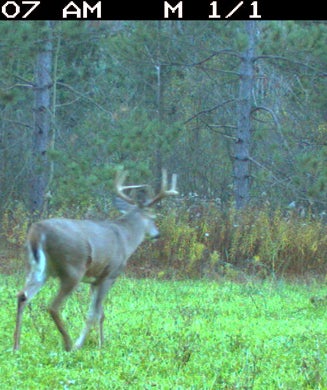 We’ve waited all year for this weekend and we’re making the official Outdoor Life call: The rut is on! Reports are rolling in from whitetail watchers across the country and most are pointing to rut-on conditions. The rut (or peak chase-phase) precedes actual breeding, or the biological rut, by about a week as testosterone-charged bucks are on the move. What it all means, however, is that the whitetail hunting should be pretty exciting this weekend.

Scouting Cameras Don’t Lie
So, when it comes to calling the rut, what information are do we use? For starters, there are the cameras. Our buck-to-doe ratios have shifted from 2.5 does to every buck to 1.2 bucks for every doe. The bucks are out and about and the does are starting to get scarce. Seeing fewer does on cameras is one of our favorite rut markers. They are being made scarce by constant pressure from harassing bucks. Most of our cameras are on feeding locations and it’s become obvious that does have backed off them as mature bucks take over the landscape.

Another sure sign is a change in the age structure of the bucks we are photographing. We are now seeing significantly more mature bucks on camera than in week’s past. A month ago it was yearlings everywhere–you couldn’t find a racked buck. Now we have a more even age-class distribution. The racked-out bucks are running about even with the little guys. This is a great rut marker providing you have some age on the bucks in your hunting area.

Finally, we are picking up many more daytime sightings of older bucks. Our old guys are plenty smart and seldom show during daytime hours. Right now, they are out and about all times of day and night. If your cameras are showing any or all of the above, pack a lunch and start putting in some treestand time.

Reports from the Field
Our network of field reporters are checking in with a somewhat mixed bag of experiences that are generally split according to the geography being hunted. The majority of high-energy chasing reports are coming from farm country. Plenty of fields and all kinds of crop harvesting mean fewer places for whitetails to avoid the watchful eyes of hunters. When guys are reporting bucks marching across open fields all times of day, you need to start paying attention. It’s not happening everywhere, but it’s happening enough that your farm might just be on fire this weekend when you show up.

Big-woods hunters are reporting less activity. This is more than likely due to the huge abundance of fall foods that are still in the woods and spreading the deer out. Many hunters who have been seeing deer on isolated food sources (often food plots) all summer and fall are reporting quiet sits. However, keep in mind that this happens every year with the onslaught of the rut as doe/fawn concentrations get broken up and forced off their feeding areas by bucks on the prowl. Chances are does are back in the woods working acorns and browse and the bucks are in there with them. It’s harder for big-woods hunters to keep track of deer activity when the deer they hunt are spread out all over the countryside not concentrated in a few known feeding locations.

One thing for sure, a bunch of good bucks got shot over the past few days and a whole lot more will be shot this weekend and next. Our emails and texts are loaded with hunter success shots and most of them on good bucks that they have been after all year (and the year before). When the tough bucks start showing up in hero shots, something is going on in the woods and you had better get in on the action.

Stand Sightings
Nothing beats putting in time on a stand and this week was no exception. We saw the best bucks of the season this week and they were doing everything a buck in rut should be doing. My son, Neil, picked up a mature long-tined shooter ( maybe a four or five year old) cruising along a ridge looking for does. That, combined with multiple sightings of younger bucks chasing, grunting, and harassing does is a sure sign that it’s time to be out there. I watched a fine shooter four-year-old hang with a doe all evening on the food plot I was hunting. Being the old experienced gentleman he was, he didn’t harass her or make any moves, he simply escorted her along, never moving more that 20 yards from her side. It always amazes me to watch how carefully an experienced buck works a doe. Two weeks ago, that buck would still be on his belly during daytime hours. Now he is out in the open making my knees knock. The closest he got was 41 yards; 10 yards too far for me. The soft signs of the upcoming rut (rubs, scrapes, sparring etc.) have been with us for weeks. Now we are seeing the actual hard signs, (does getting scarce, older aged bucks out and about, older bucks with does) and that means it’s time to hunt hard.
**
How to Hunt**
The trick to hunting this weekend and the next 10 days will be to get in the woods and stay there. This time of year can be the best of times and the worst of times (all in the same weekend). If you get in the middle of a chase or wind up in an area with a hot doe, you will never forget it. If, for example, all the bucks in your area are chasing the same doe and they are all over the hill, it can be a pretty quiet morning. In spite of what we all like to believe, you can have some pretty quiet sits during the rut. The smart hunter packs his lunch and hangs tough. You are just as likely to catch a good buck at 11 in the morning as at dawn or dusk. Forget the rules and hunt.

The trick this weekend will be to hunt does because where the does are will be where you find the bucks. Not where the does were mind you, where they are. Many of the does we have been watching all summer have relocated to quieter, safer, areas to avoid the onslaught of buck pressure. They are still on the feed, but not in the same old feeding locations. One of the biggest mistakes of hunting the rut is hunting where the does were last week or the week before. Many does have been relocated by marauding bucks; if you know where they are now, hunt them. If you aren’t sure set up on crossing areas, neck downs and anywhere else you are apt to catch a buck as he marches about patrolling his turf, moving from one doe group to the next. If antler rattling works in your area (it does not work everywhere) give it a whirl, a grunt call or snort wheeze will often turn an old warrior in your direction. But don’t over do it; each buck is different and what works with one, might not work with the next one.

And one more thing, weather matters. Cold crisp days are what you are looking for. Temps over 50 means quiet days and wild nights.