This buck wasn’t recently killed, but it’s so impressive, we figured we’d tell you the story anyway. Illinois hunter Bob... 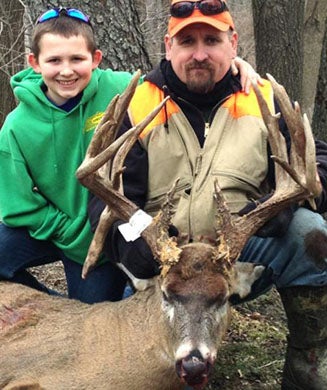 Weber, then 44, was battling a cold on the morning of the hunt and didn’t plan to go. But Jake, 13, managed to drag him out of bed and out the door for the special CWD season. Although Weber knew the big buck was in the area, the pair had set out in hopes of tracking a doe. They were hunting private property full hardwood flats, big draws, and 200-foot ravines.

Jake chose the setup and opted to sit on the ground. But just as prime sunrise hunting rolled around, he realized nature was calling and it couldn’t wait. Jake headed for a remote spot, then set up by a different pine tree. Meanwhile, Weber decided to circle the timber and let the wind carry his scent through the trees, hoping it would push a doe toward Jake. About 100 yards later Weber spotted a group of does moving away from Jake’s setup. Two bucks followed behind. The bigger buck of the pair kept glancing back into the woods, and that’s when Weber spotted him.

The massive drop-tine buck stood almost 200 yards from Weber. With so many deer in sight, Weber sat tight until they walked away along a nearby ravine. The big bruiser bedded down facing Weber, but eventually rose and browsed toward the same ravine. Whenever the buck moved, Weber crept closer.

“The adrenaline was unbelievable,” Weber said. “I ain’t gonna lie. But this would be 30-some years I’ve been hunting. I’ve got some real nice bucks on the wall, so I could talk myself down and calm down.”

Finally, he closed the distance to 60 yards, and the buck stopped broadside. He turned his head and stared right at Weber.

Finally the buck looked away and stepped forward, providing a clear shot. With his muzzleloader resting on a tree branch, Weber lined up the crosshairs and fired.

“When the smoke cleared I saw him running and his head literally was dragging on the ground,” Weber said. “Just like a plow, just digging up the soil. So I knew I had him pretty good.” Jake heard the shot at 7:30 and knew Weber must have seen the buck. The two met up and headed home. A couple hours later Weber returned with two buddies to track the buck. They picked up the blood trail immediately. Just 30 yards over a small hill they found the buck piled up from a double lung shot.

“We were like a bunch of school kids,” Weber said. “I probably got a little teary eyed. We were hugging and we all put our hands on him and started taking pictures.”

Weber credits Jake with the successful hunt. “He did everything but pull the trigger. I would not have went out, I would not have seen that deer if it wasn’t for him,” Weber said. “If he didn’t have to go to the bathroom we would’ve sat there and never seen any deer.”

“Once you see something like that — that you’ve just killed — and I put him in my hands it was just like, ‘Well, in my life there’s no chance of ever beating him,'” Weber said.