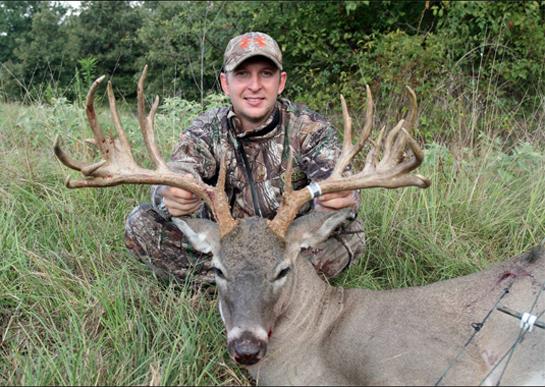 Beaver first discovered the buck when scouting for a place to hang his treestand in August. He left a small pile of corn and a game camera in the woods, picking a location with creek beds, ditches, and dense cover. This limited potential shots to just 30 yards. When he first discovered the 20-pointer on camera, he set up a stand and checked the photos periodically. Pictures revealed the buck would show up every four to five days, and almost always in the early morning.

“I was really beginning to get worried,” Beaver told the Athens Review. “I felt like my chances of killing him were dwindling with every day that passed. I had him patterned pretty well in the area I was hunting, but I knew that was probably about to change.”

The first days of the season proved disappointing. Opening day revealed feral hogs had disturbed Beaver’s bait pile; The following day the big buck and an 8-pointer caught his scent and busted him. Beaver took a break for a few days before returning to his stand on Oct. 2. Just after 7 a.m. he saw the same 8-pointer over his shoulder. He heard movement behind the small buck and quickly spotted the 20-pointer’s distinctive rack just 15 yards away.

The buck spooked when he stepped near Beaver’s stand and ran 20 yards to catch up with the 8-pointer. When the smaller buck stepped into a shooting lane, the bigger buck followed. Beaver seized the opportunity to shoot, making a double lung shot at 22 yards. The buck ran 80 yards and piled up. When Beaver climbed down to recover the deer, however, he discovered a feral hog rooting around his buck. After the pig took off, Beaver discovered a chunk of flesh missing from the buck’s hindquarters.

Despite the chance encounter with the hog, Beaver was thrilled with his hunt. Thanks to a little luck and some patience he was able to kill a great, free-range buck in East Texas, which is no easy feat.

“From the moment I first saw him I dedicated my season to killing this deer,” Beaver told the paper. “Luckily, it all worked out and I got it done. I’ve killed some good deer in the past, but it is extremely satisfying to take a deer like this, especially with a bow. A lot of people think it’s easy. But it’s not. There is so much to contend with out there. One little mistake is all it takes to blow it.”