Indiana Bowhunter Faces Off With A Giant Buck

Indiana hunter Anthony Giger arrowed this nontypical bruiser in Brown County, Indiana on the morning of Nov. 4. Although he... 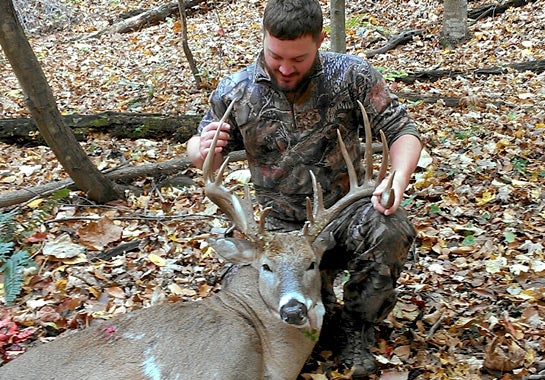 Indiana hunter Anthony Giger arrowed this nontypical bruiser in Brown County, Indiana on the morning of Nov. 4. Although he initially planned to fill his doe tag, the 35-year-old ended up with more meat than he bargained for and an incredible trophy buck to boot.

The night before his hunt Giger set up in a cow pasture strewn with white oaks. The surrounding hills formed a funnel and plenty of trails crisscrossed the private property. But Giger’s chosen tree didn’t offer many good shots and the next morning he relocated 25 yards uphill—dragging an attractant scent behind him as he carried his climber to the new tree.

The morning passed uneventfully until Giger spotted several does on an opposite hillside at 9:45 a.m. They were out of range, however, and the deer eventually moved on. Fifteen minutes later Giger heard branches rustling at the bottom of the hill. Thinking he might get a shot at one of the does, Giger kept a close eye on the brush. The noise continued, and a hoof appeared from behind a tree at 40 yards. It was followed by a nose and a set of antlers.

“Right then and there I knew this was a stud deer,” Giger said. “This isn’t a typical deer for my area. So I’m looking at this buck and I’m just in shock. I’d never seen this deer before and really never expected to see something this large come my way. So the adrenaline kicked in.”

The buck stepped cautiously out of the thicket and began to walk up the hill toward Giger. When the bruiser reached the tree Giger had staked out the previous night, it stopped. “He started sniffing up and down this tree, up and down,” Giger said. “And the whole time I’m thinking, ‘Oh man I’m busted. He’s got my stand, there’s no way I’m going to get a good shot.'”

Finally the buck put his nose to the ground and began to follow the scent again. Relieved, Giger thought he was in the clear—the buck seemed more interested in trailing the scent than anything else. But just outside 10 yards the buck hesitated. “He stops, just stops dead in his tracks,” Giger said. “And he turns and looks straight up at me. And I still didn’t have a shot.”

Fortunately Giger had already picked up his bow and was holding it in front of his face. He narrowed his eyes and held the bow steady. “I’m sure it was a full minute he just sat there and looked at me. So we’re at a staring contest at this point. I mean this deer is right there. I could jump out of my stand and jump on him.”

Finally the buck lowered its head, then took a step. It looked away from Giger and he took the opportunity to draw his bow. Another step and the buck was almost directly below him. The angle was so sharp Giger had to balance on one foot and lean out over the stand. He picked a spot just behind the buck’s shoulder and hit the release.

The buck jumped and took off up the hill, disappearing from sight. “Now at this point, I never should have figured he was mine,” Giger said. “But I knew I put a perfect shot on the biggest buck of my life.”

Already celebrating in his stand, Giger left a voicemail with his brother-in-law and climbed down 10 minutes later to recover his arrow. The shaft was bright red and blood had soaked into the feather fletching. Giger trailed the blood just 50 yards uphill and found the buck piled up where it had disappeared from view. Giger sat with the buck and admired it for several minutes. “I’m just looking at it, just staring. I’m in awe of this buck,” Giger said. “I can’t believe it.”

Eventually Giger pulled the deer downhill and dressed it alongside a run-off ditch while he waited for reinforcements. “By this point I’ve got everybody in the world calling me because no one believes I’d just shot a monster buck,” Giger said.

It took Giger, his brother-in-law, and two buddies to haul the buck out of the woods. They returned to his brother-in-law’s store and check-in station, where they left the deer for the day. Giger estimates 150 people stopped by to see the buck, many of whom asked to hear his story.

The dressed buck weighed in at 213 pounds. Geiger and his uncle, a taxidermist, rough scored the 18-pointer at 168 6/8 inches. The Boone and Crockett Club records do not show any nontypical whitetail entries for Brown County. Which just goes to show Giger’s buck is definitely unusual for the area. “I can’t believe this deer made it to me, because everywhere around me everyone hunts,” Giger said. “So I feel very fortunate to have the opportunity to take this deer.”