After standing unchallenged for 70 years, Louisiana’s largest typical whitetail might yield it’s top spot to not one, but two... 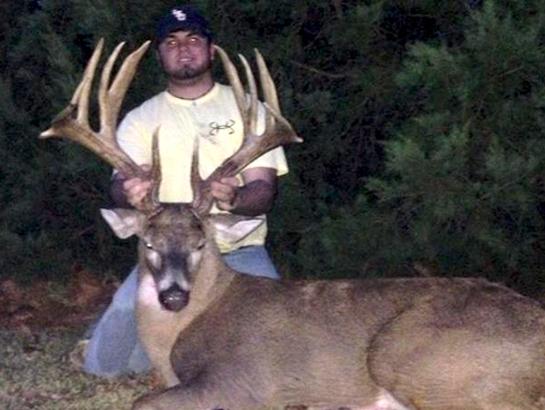 After standing unchallenged for 70 years, Louisiana’s largest typical whitetail might yield it’s top spot to not one, but two recent record-breaking bucks.

Alex LeBlanc shot one of those bucks in St. Landry Parish, La. on Dec. 20, according to the Louisiana Sportsman. The weather was hot and humid with temperatures peaking in the high 70s. Despite the muggy conditions and his buddies’ protests, LeBlanc headed for a box stand on his cousin’s QDMA-managed property.

He climbed into the stand by mid-afternoon and didn’t see anything for more than an hour. The afternoon was so slow the 20-year-old even kicked off his boots inside the box. But at 4 p.m. LeBlanc spotted something through his window that made him sit up. Fifty yards away a buck stood in his shooting lane.

“I saw his right antler first, and it was was huge,” LeBlanc told BayouBucks.com. “I must have bumped my gun three or four times just trying to get it out the window!”

As the buck moved into the middle of the lane, LeBlanc lined up the crosshairs on his .270 and fired. The buck stumbled, crashing to its chest before recovering and running out of sight into the saplings. LeBlanc spoke on the phone with his uncle who had been hunting nearby, pacing around his stand as he waited. When LeBlanc’s uncle arrived, they examined the shooting lane and discovered hair and blood on the ground. The team easily trailed the blood just 50 yards to find the buck piled up.

“We were all freaking out,” LeBlanc told the website. “We just couldn’t get over how big the rack actually was. You really have to see it in person to fully understand its size.”

LeBlanc described the buck as a mainframe-15 with a pair of droptines, one of which had broken or never fully developed. The buck weighed 220 pounds with a gross score of 211 1/8 inches and a net score of 204 1/8 inches.

The other potential state record buck was killed just northeast of the LeBlanc buck in Concordia County on Nov. 9. Hunter Jason Archer’s typical buck measured a gross score of 223 7/8 inches and a net score of 210 7/8 inches, according to Louisiana Sportsman. If this score holds up, it will be one of the biggest bucks of all time.

The LeBlanc and Archer bucks will likely bump the current state record buck down to third place, although the exact order will remain uncertain for a couple months. The current first place buck was taken in Madison Parish, measured 184 6/8 inches, and has topped the record books since 1943.