Whitetails Hunkering Down for Winter

The past two months have been unseasonably cold across much of whitetail country. Temperatures have plummeted, winds have blown and... 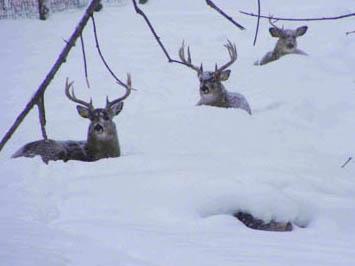 The past two months have been unseasonably cold across much of whitetail country. Temperatures have plummeted, winds have blown and snow has fallen. Whitetails are beginning to hunker down for the long winter ahead.

We noticed the first signs of the hunkering down about two weeks ago on our upstate NY farm. Our deer have started feeding less and bedding more. Even though we still have standing corn and plenty of green groceries to munch on, the deer using our property are spending less time on it than they did in early December.

Instead of feeding aggressively through the afternoon hours and well into the evening, they are spending a half hour or so in the corn and more time munching woody browse. They are lying up all night in the thickest densest thermal cover they can find and spending most of their daylight hours bedded on south-facing slopes–you can’t cut a track on a north-facing slope. You see where they have ambled along, nipping a bud here and a shoot there. Maybe they pawed through the snow to find an errant acorn or something green. Instead of walking a half mile to feed on standing corn, they will walk 20 yards to chew on some woody browse or nip off the last vestiges of something that grew last summer.

The winter slow down doesn’t happen overnight; it sort of sneaks up on us. Deer sightings gradually decrease and you stop seeing them in all the old places. Warm days and mild weather will put deer on the move a bit, but as the respites become shorter and fewer, the need to conserve energy by eating less and staying put increases.

The job of a whitetail in winter is to stay alive. Pregnant does have to hold on to their developing fawns and rut-stressed bucks have to endure the hard times ahead and live to fight another day. They do this by staying on their bellies and out of energy-zapping winter weather as much as possible. Thick winter coats with hollow guard hairs allow them to bed with little energy loss. Food intake is but a fraction of what it was a month or two earlier.

Whitetails live primarily off of fat reserves during winter; fat they put on during the summer and fall and burn up during the rut.When the fat is gone, they start on the muscle; after that, there isn’t much left for the coyotes.

Deer have hunkered down early this year. If your hunting season is still underway, scouring south-facing slopes is a tactic that just might pay off on the coldest of days.