Whitetails This Weekend: Focus On Food And Weather

With the rut officially over, it’s time to shift to hunting food sources and keeping your eye on the Weather... 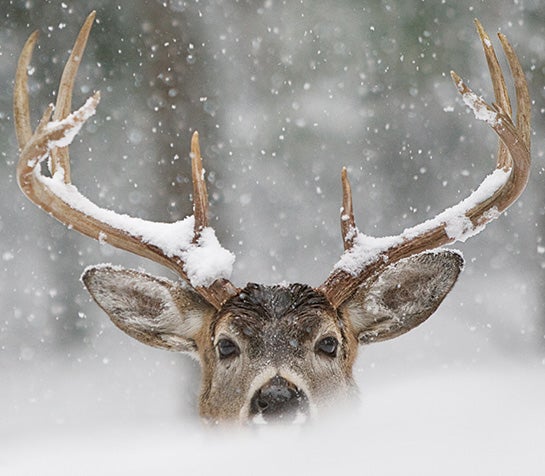 With the rut officially over, it’s time to shift to hunting food sources and keeping your eye on the Weather Channel. Late-season bucks are recuperating from two months of intense activity and that means food and rest. The wildcard in the equation is severe winter weather which will force them into daytime feeding activity.

The Rut Takes Its Toll
Rutting bucks typically looses 20 to 25 percent of their body weight. Skin a good northern whitetail buck in mid-October and he’d likely to be covered with fat. Two months later and he’s all muscle. That’s fine for a prize-fighter, runway model or long distance runner, but not so good for a whitetail deer headed for winter.When there is little food to be had, the fat goes first and then the muscle.

The Need to Feed
But whitetails are the ultimate survivors. Something tells them to put the weight (and fat) back on as winter approaches; that means hitting high carb fat-producing foods. Whitetail watchers from across the country are reporting food plots and crop fields loaded with deer. They are chowing down on turnips, and beets and kale and rape. Standing corn is covered up with hungry deer as are soybean fields and anywhere acorns can still be found. Late-season apples and fruits may be hard to find, but will draw a crowd if available.

Keep in mind that whitetails can generally paw through about 8 inches of snow to find food before switching to browse. If standing corn is available, they will be all over that. Low-hanging limbs holding late leaves (some oaks) are also attractive to snowed-in deer as are seed pods such as multiflora rose hips and standing forbs like goldenrod.

Staying Alive
Fawns have been reunited with their mothers and young bucks are out and about looking for something to eat. Older-aged-class bucks alternate between resting their tired and beaten bodies and feeding when they can–without getting shot. Old bucks remain plenty smart and they are not about to waltz out into the middle of a turnip patch in broad daylight. Unless weather changes the equation, they will feed under the cover of darkness back in the thick stuff where they are hard to find.

The Weather Factor
Harsh conditions now can be a game changer. Late-season cold snaps, sleet and snow will drive deer to feed during daytime hours and that often means places where they can be more easily found. Once temperatures drop 10° below normal, a whitetail’s need to conserve energy intensifies and that means feeding during warmer, daytime temps. They may not feed during an intense winter event but they sure enough will as soon as the weather settles. They will feed as it approaches as well. Severe weather seems to trigger a approaching winter warning which sends them into a fat-producing feeding frenzy. The need to feed will be on in full force.

Hunting This Weekend
Hunting this weekend? Great, the weather looks great with severe winter conditions all over the map. Pick a day with some sound-dampening wind, a little blowing snow, or maybe a nice sunny day with single-digit nights, and head for the woods. Or better yet, locate a standing cornfield or turnip patch. No corn or turnips? Look for heavy cover with plenty of browse. But don’t underestimate these old survivors. The need to stay alive always trumps the need to feed and they are plenty wired from months of pressure. It is still a game of stealth.