Whitetails This Weekend: Get On The Food

Late-season hunts are all about finding food sources and hunting them. It’s also about hunting soft and quiet. Late-season bucks... 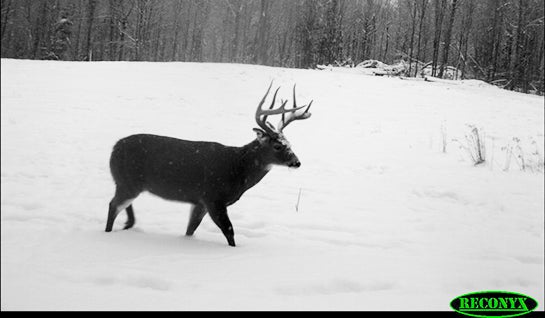 Late-season hunts are all about finding food sources and hunting them. It’s also about hunting soft and quiet. Late-season bucks are basically recuperating from two months of intense activity and that means plenty of food and plenty of bedding behavior. Sure, you may catch a little late season breeding activity, but the smart money is on the food. Any breeding that occurs will basically be a random event.

The Real Rut is Over
The rut that we know and love is best seen through the rear-view mirror (at least across 95% of whitetail country). The serious chases are basically over and the fighting is down to a little pushing and sparring among bucks that are once again starting to hang out together. Big bucks are preoccupied with eating than breeding. Make no mistake, they will breed an estrus doe if they happen upon one, but their mission is focused on refueling.

The Need to Feed
High on their list of foods right now are high-energy fat-producing carbs. Standing corn is a favorite as are soybeans and any acorns the squirrels haven’t hidden by now. Food plotters are seeing plenty of action on brassica plantings such as turnips, beets, kale and rape.

Browse is generally the last choice of late-season whitetails but it is often the only choice. A whitetail can generally paw through about 8 inches of snow to find food but in deeper snow it can be browse or nothing. Many browse species are still holding fruit–berries, and seed pods. Deer will eat them first and then move to twigs, stems and late-fall leftovers. The last 1-inch of the most recent growth contains 90% of the nutrition.

The Pressure Factor
By now, most deer have been hunted and hunted hard. They are still wired and are quick to hunker down or get out of town. Last week, we drove a pickup through a woods road to pick up a ground blind and started a major stampede as our deer went up and over a mountain. Earlier in the season we could take the same route and drive past a dozen deer staring in curiosity. Now they fly like the wind and are gone.

We are getting plenty of reports of older aged bucks that are primarily nocturnal. Our hunts have been most productive during the last 20 minutes of shooting light. They only show during daylight hours when severe weather drives them to feed. Our cameras are showing the same. We see deer in our headlights in all the familiar places after dark with very few during daylight hours

Severe weather changes this. Once temperatures drop 10° below normal, a whitetail’s need to conserve energy intensifies and that means feeding during warmer, daytime temps. They may not feed during an intense winter event but they sure enough will as soon as the weather settles. Most of our best bucks have been taken during severe weather conditions. Our cameras light up during these periods as well.

Hunting This Weekend
The weekend hunting strategy is to hunt food and hunt it like a ninja. Even though the occasional doe may be cycling in for breeding purposes, the high percentage play will be to hunt food and the hotter the source the better. Severe weather and cold temps are your ally and will force the big guys back into the open. If they have been hunted hard, they will probably move late.

If you are lucky enough to be hunting low pressure deer, midday sits in below average temps can be very productive. If the sun warms things up, all the better.

For those of you in the 5% of the country (parts of AL, MS, TX, LA etc.) where the rut comes late, you know the drill, get out there and put in your time. The rut makes good hunters of us all.

One final note, some bucks (especially injured ones) have already cast their antlers. Before you drop that big doe in front of you, be sure it is not a buck with two half-dollar sized circles on his forehead.