My son Neil phoned me this morning with a winter kill report from one of his client’s properties. He has... 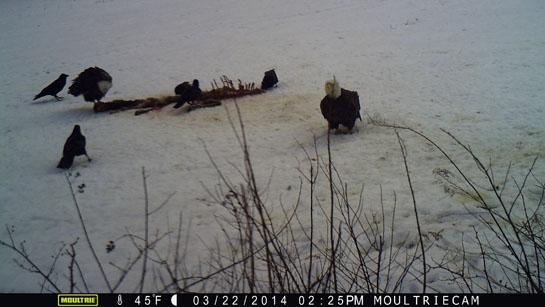 My son Neil phoned me this morning with a winter kill report from one of his client’s properties. He has been walking the property for two days and so far he has turned up almost a dozen carcasses. He estimates this to be about 5 or 6 percent of the deer using the downstate New York property, which was hard hit with winter weather this year. Overall the habitat in the area is poor. Short of a few standing cornfields (which were cleaned up in January) and some greenfields (which were covered in deep snow), there was little food available through much of the winter. The area is also plagued by an overpopulation of deer; roughly 100 deer per square mile. They are lucky to only have lost that many.

The finds were classic winterkill. The deer were discovered in a few thick stands of pines where they no doubt headed to ride out that one last storm. The first thing you generally notice is hair scattered everywhere. Picked over skeletal remains are lay scattered about. The trick is to figure out how many deer carcasses you are looking at and how they died. The scavengers had worked over the bones pretty good but Neil was able to find a few large leg femurs to crack open. Inside, lay the telltale signs of starvation. The bones were filled with pinkish-red jelly-like liquid; not the white to cream colored-semi-solid marrow found in the bones of healthy deer. The starving deer had consumed all the fat reserves in their body including the marrow of their bones.

Neil is not the first to report winterkill. We are beginning to hear the bad news from the guys with the boots on the ground. Northern states were savaged by winter storms this winter and increases in mortality are to be expected. Brian Murphy, CEO of QDMA expects this year’s numbers to be one of worst winterkill years on record.

“That’s not what we need this year,” says Murphy. “With reduced deer numbers being reported all over the country the past few years, the entire deer community has become concerned about decreasing deer numbers. Increases in predation and diseases have had an effect and now we throw in a super tough winter. We are going to have to be careful with doe harvests next season”.

Some areas are still snowed in and winterkill can not be precisely gauged until a good thaw hits. Other areas are open and now is the time to do it–while the evidence is still fresh and you are out hunting sheds.

When looking for winterkill, pay particular attention to sheltered areas where winter-stressed deer are likely to lie up out of winter’s deadly grip. They are often covered with deer pellets. Hair strewn about the area is the first sign of a dead dear nearby. Keep track of any and all skeletal remains you come upon and do a little forensic work to try to sort out whether the kill was the result of starvation or some other factor. Remember the bone marrow test. If the bone marrow is still whitish or cream colored, you may be looking at predation or something other than starvation.

The property Neil was working on is overpopulated by deer and he and the owners have been trying to take the numbers down for years. Harvesting 40 percent of the adult does each fall (to gradually reduce numbers) is no easy task. While he hates to think of a deer starving to death, this property could use a little help from Mother Nature. He expects more deer to succumb before it is over, as starving deer do not rapidly bounce back just because the snow melts and temperatures moderate. Some are highly stressed and vulnerable at this time.

Kip Adams, QDMA Northern deer biologist reports that winterkill is a fact of life for many northern locations. It happens every winter. As far as this winter goes, “it will undoubtedly be worse than average and may show up in some marginal areas.” State agencies are able to compute the winter severity index (WSI) and compare it to prior years kill to estimate how many deer will die. But these estimates are just that–estimations.

But what about you? How will winterkill affect the property you hunt. Are your deer numbers in need of a reduction or a little boost? Will winterkill help or hurt your deer management program? These are questions you should be asking yourself and a great reason to get out there and do something more than looking for sheds. This year you need to be in the deer management business more than ever.

And one more thing, QDMA recently hosted the first National Deer Summit meeting in Missouri. One theme emerging from the meeting was that state wildlife agencies are dramatically understaffed and desperately need the help of landowners and hunters to help them manage their deer herds. Let your agency know what you are seeing on the back 40. It will help them do a better job managing the deer herds we all enjoy and get them accustomed to listening to the boots on the ground. We have about 16 million of them.