Are We Overlooking the Biggest Threat to Deer and Deer Hunting?

The recent North American Whitetail Deer Summit hosted by QDMA is well over, but it’s impact is still being felt.... 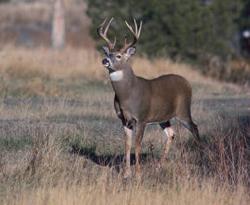 The recent North American Whitetail Deer Summit hosted by QDMA is well over, but it’s impact is still being felt. The summit identified the principal threats facing deer and deer hunters and spawned a national initiative to do something about them. The summit identified all kinds of issues threatening whitetails, but the 800-pound gorilla in the room somehow got lost in the shuffle.

The summit was held a month ago in Branson Missouri and attracted more than 200 of the best minds in the deer business. Representatives from across the whitetail stakeholder spectrum showed up to take a hard look at issues facing deer in North America.

The group met for two and a half days and produced an extensive list of issues and ranked them from most threatening to least. In all, some 20 items were identified. At the top of the list: 1) hunter recruitment and retention; 2) education to support hunters; 3) hunting and access; 4) influences; 5) the captive deer industry; 6) deer diseases; 7) public concern for population levels low or high.

Additional threats were listed, but surprisingly, “declining deer numbers and corresponding hunter success rates” did not get the traction that some of the more traditional threats to deer and deer hunting received.

Brian Murphy, CEO of QDMA opened the meeting by calling out the gorilla. High on his meeting priority list was declining deer numbers, “For the last 3 years or so, whitetail numbers and hunter success rates have been declining nationwide.” But even this warning did not bring the issue to the summit’s forefront.

The facts must not be ignored. Deer numbers are declining and so are hunter success rates. The stakes are high. Eighty percent of all hunting in the U.S. is deer hunting. Without deer, we could lose a $24.9 billion industry that supports 600,000 jobs.

Am I being an alarmist? Perhaps, a little. Of course, whitetail populations are dynamic and this year’s bust could be next year’s boom. But, with stakes like these, I can’t but help sound the call. For the past few years we have been getting “where are all the deer?” reports from all over whitetail country. One year it’s EHD, the next bad weather, or declining habitat, or too many antlerless permits issued. Each year it’s something, but the net-net is the same — fewer deer and less success by deer hunters. Hunters are pointing an accusatory finger at wildlife agencies, and in many cases for good reason. Hunters may be paying the freight, but agencies serve many masters (called stakeholders by the management community and bureaucrats) and some of them are happy to see deer numbers declining.

Now don’t get me wrong, the very fact that QDMA got more than 200 deer “stakeholders” (including hunters) together to look at deer issues is a feat in itself, and make no mistake, there are enough deer issues out there to go around. But none, in my opinion, looms larger than declining deer numbers (and hunter success rates).

I quizzed Murphy on the seeming lack of concern for the decline. He suggested that the point he made in his opening remarks may have gotten lost in the “noise” of the many important issues (disease, deer farming, access etc.) that have shown up on the deer community’s radar for some years now. Declining deer numbers have yet to be “institutionalized” by the deer management community. Murphy hears from the hunting public daily and predicts we will be hearing much more about declining deer numbers and success rates in the future. He believes state agencies need to dial into this issue now. They can’t afford to react slowly on this one.

One organization that has not been slow to react is QDMA. Since the summit, they have been hard at work creating a coalition of the willing and corresponding action plan to do something about the threats to deer hunting and our hunting heritage. They expect to announce the details of the plan shortly.