Exactly 48 hours ago, I was feeling pretty darned good and rolling down the road with the bed of my... 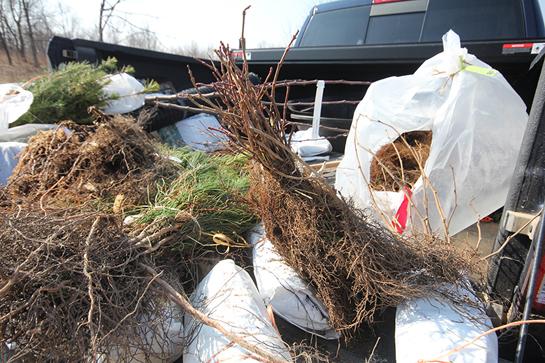 Exactly 48 hours ago, I was feeling pretty darned good and rolling down the road with the bed of my truck loaded with about 350 trees and shrubs that I’d just picked up as “leftovers” at my local county conservation district’s annual tree sale.

I didn’t really intend to buy 350 trees and shrubs. Truth be told, I was looking to get around 300. But I just couldn’t help myself.

Well now I’m realizing I have 350 trees and shrubs to plant. Which means I also have 1,050 stakes to drive in the ground and wrap with fence.

While I had seen the announcements for the tree sale in the local paper plenty of times, I’d never ordered any trees, let alone shown up during the scheduled pickup time to buy any of the surplus stock. Thus I was more than a bit surprised when I pulled into the parking lot at 8:03 a.m. and saw the horde of people clamoring for the leftovers. The doors had opened just three minutes earlier… It was like Black Friday for arborists.

I was hit by the fever.

I slammed the truck into park as quickly as I could and the door was open almost before the engine stopped. Fortunately, I had brought two buddies along with me and we work pretty well together. I shouted the names of desired species as we dashed about trying to find unclaimed piles of seedlings.

I snatched a pair of pear trees just before spotting a bag of 150 highbush cranberry shrubs. I grabbed the bag – that species was high on my list – and then loaded up with as many bundles of American hazelnuts as I could handle.

My partners were having luck as well although I can neither confirm nor deny that one of them plucked a bundle of silky dogwoods from the hands of an indecisive shopper… When the final haul was laid out in front of the cashier’s table, I wrote a check for about $300. Yep, that’s what I call a bargain.

Why so many trees and shrubs when I’ve got but 17 acres to work with? Simple. Insurance.

The stock I bought is of the seedling variety. Meaning they’re young plants, averaging about 6 inches in height depending on the variety and 100 percent survival rate is nothing more than a fantasy.

How many of the seedlings will survive? There doesn’t seem to be much consensus on the topic but near as I can figure from various online stories and research documents from forestry departments, it’s likely I’ll lose about 20 percent.

My goal is to add as much security and bedding cover to the property as I can while also adding some improved browse.

While we were running during the tree sale, we weren’t running without a plan. I relied on several resources to determine what varieties of trees and shrubs I wanted.

I started by reading Jeff Sturgis’ Whitetail Success By Design book and followed that up by checking out as many websites as I could find on the topic of shrubs and trees for whitetails.

Morse Nursery (morsenursery.com), a Michigan-based nursery known for specializing in wildlife plantings, was one of my go-to sites for determining what varieties would grow well in my area as well as solid descriptions of each species along with photos. The Quality Deer Management’s (qdma.com) site was another wealth of information.

After compiling a list of top species, I then cross-referenced with what was being offered at the Conservation District’s tree sale. My final list included highbush cranberry, silky dogwood and American hazelnut along with conifers for quick screening cover.

Highbush cranberry offers good security cover and is fast-growing. It will produce edible berries that last through the winter months and are said to be relished by deer, turkeys and other critters. It can also be planted in light soil – which is critical given that I have plenty of that.

I don’t know that I’ve ever seen a hazelnut shrub, but they are intriguing plants. They form thick bushy shrubs that are fast-growing and excellent for cover in addition to producing edible hazelnuts.

The silky dogwoods are going into the areas with heavier, wetter soils. These aren’t the dogwood trees that bloom when the turkeys gobble. These are a shrub-type tree that can create dense thickets and can be planted in semi-shady areas, which is ideal for creating in-timber bedding cover as well as edge habitat.

The conifers will be used in pockets to enhance existing shrubs in the center of the property that’s semi-open in an effort to create additional bedding and security cover.

To plant the trees, I’m using nothing more than a simple, short-handled drain spade. For the conifers, dogwoods and hazelnuts I step the spade into the ground, wiggle back and forth to create a slot in the ground and slip the roots in.

The cranberry bushes, on the other hand, have a decent root system and require digging a larger hold. And, of course, they were the most numerous of the shrubs I bought. So, I’m hating them right about now.

But I came up with a solution to the cost that I think is going to work well, but it will add to the overall time it’s going to take to protect the plants.

But at less than 25 cents per shelter, it’s time that’ll save a lot of cash. Next week, I’ll show you how I did it.
**
THE TAB**
The goal of The Micro Manager is to see if we really can turn 17 acres of ho-hum ground into great deer hunting land. But we’re also going to try and show that such things can be done on a tight budget. Thus we’ve set a limit of $1,500 for this year’s habitat work expenditures. Each week, we’ll keep a running tally at the end of each column. Here’s the current tab thus far:
Chainsaw gas and oil: $11
ATV fuel: $6
Trees/shrubs: $312.50
Drain spade: $16