Micro Manager: Do Some Math and Save 40 Percent On Your Food Plot Seed

Those of you who have been following the Micro Manager series know that I’ve set a budget of about $1,500... 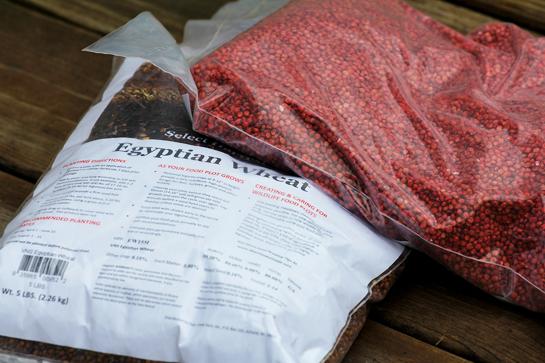 Those of you who have been following the Micro Manager series know that I’ve set a budget of about $1,500 for the first year of habitat work on Noah’s Farm, a 17-acre parcel I purchased late last summer.

While $1,500 is a fair amount of money, it’s a spartan budget considering everything that needs to be done. That become abundantly clear when shopping for the seed I’ll need for food plots and screening cover.

As mentioned previously, my primary concern for this year’s habitat work is focused on enhancing the existing browse and food sources that already exist on the land. I value security and holding cover far more than food in my area of heavily-hunted southern Michigan, thus the bulk of my efforts (and cash) will be focused there.{C}

But I do need to add to the existing food base and a couple of small food plots will do just that. In addition, I need to add some screening cover that will allow me to enter and exit stand sites with as little impact as possible, and I also intend to use that same blend of screening cover to create additional bedding and security cover on the parcel.

The screening will be accomplished with a blend of Egyptian wheat and forage sorghum.

There will be one plot of about ¾ acres of soybeans, which I intend to fence off from deer until November. This plot will be my late-season hot spot.

Two additional plots will be created as well. The first will also be soybeans but that plot will be available to deer in late summer and throughout bow season. The second will contain a mix I’ve had good luck with that includes oats, radishes and a few other green plants. The goal is to provide some sort of forage for as long a period as possible that deer prefer at different times of the fall (we’ll cover more on that concept in the future).

In the next week or so, the prep work will begin to prepare the plots. It was time to start buying seed. When researching options, it became pretty clear that my budget was going to take a bigger hit than expected. It was time to get creative.

Math was never my strength in school. In fact, I had to take the remedial course my first year at Michigan State University just to qualify for the required classes to complete my degree.

It was a struggle; I’ll readily admit that. But then I entered the “real” world. The one where I had to pay for things I’d always sort of taken for granted – car insurance, fuel, food, and broadheads. Math suddenly seemed a whole lot more important. And, it started to make a lot more sense.

I wouldn’t label myself as “cheap” necessarily. But I seldom buy anything at full retail price. I won’t buy anything that I can make myself and I don’t care what brand is on the label (or which celebrity is singing its praises) so long as the product I pay for does what its supposed to do.

There is no shortage of well-marketed companies offering pre-mixed blends of food plots. Most focus on brassicas and clovers but a few are also offering screening mixes similar to the ones I’d like to employ.

Now, I’m not going to name names here because that’s not the purpose of this entry. What matters most are the numbers.

For my screening cover, a mix of Egyptian wheat and sorghum will be used. I’ve used this in the past with very good results. But it’s not cheap.

I figure I’ll be planting just under three acres. The cost of that seed from an outlet that markets specifically to hunters is around $180 plus $15 shipping for a total of $195.

That’s roughly 13 percent of my total project budget. Obviously, I needed to find a cheaper alternative.

And I did. Searching around the Internet, I ran across several outlets that were selling Egyptian wheat and sorghum separately at prices that were substantially less. All I needed to do was blend the two together to create my own screening mix. I’m making that sound a lot simpler than it really is. I don’t know what the exact ratio of EW to sorghum is in the commercially-blended products I’ve used in the past. Nor, for that matter, do I know what specific varieties of sorghum are used in the blend.

But I do know this: I’m willing to experiment if it means I’ll save 40 percent or more.

With shipping, my order came in at $110 and I have enough seed to plant nearly three acres.

I was able to realize the same type of savings on soybeans simply by shopping around and researching different varieties of beans – but the use of soybeans in food plots is a subject complex enough that we’ll cover that topic in a separate entry.

A 40 percent savings is significant. Does that mean the big-name seed companies are ripping off the hunting community? No. At least not in all cases.

When dealing with seed, there are a few things that matter: Freshness and quality of the seed being paramount.

So how can you tell if the seed is fresh or of high quality? Look at the bag. Each bag will generally feature a label that tells you a couple of key bits of information. Including:

Purity: This is the percentage of the bag contents that is actually the seed you are buying. This is an important number because some seed companies coat their seed. So that 5-pound bag of “seed” may only contain three pounds of actual seed. Personally, I prefer to see purity of at least 95 percent with 99 percent being ideal.

Germination Rate: This is an estimation of the percentage of seed in the bag that you can expect to germinate. In other words, what percentage of the seed that goes in the ground will actually grow?

You may also see percentages for Other Crop, Inert Matter, Weed Seed, etc. All of those should total to be less than 2 percent at most.

Now here’s where the math comes in – and it’s this math that will determine whether your seed “bargain” is really a bargain at all. It’s time to calculate the Pure Live Seed equation.

To do this, simply multiply the germination rate by the purity rate. In the case of my Egyptian Wheat seed I have a 90 percent purity rate (.90) and a germination estimate of 80 percent (.80). Multiply those together and you have a PLS of 72 percent.

Therefore, of the 5 pounds of EW seed in the bag, roughly 28 percent of that seed is not “live” and likely will not grow.

In regards to the sorghum, the purity rate is 99.96 percent and the germination rate is 90 percent for a PLS of nearly 90 percent.

Now if we take the two percentages and average them together, we’ll get a blend that should have a germination rate of about 81 percent or so.

To determine whether my seed purchase was truly a cost-savings, I calculated the PLS of the more expensive seed. The blend includes several different varieties of seed so I simply averaged out the germination rates listed and came up with an 86 percent germination rate. Then I averaged out the purity figures and came up with 99.57 percent. The total PLS? It comes in at 92.57.

So, I saved about 40 percent by shopping around and buying individual seed varieties to create my own cover blend and sacrificed a little less than three percent in total PLS – a figure that’s likely a wash given that the germination rates are an estimate and could easily be off by a percentage point or two.

If the PLS percentage had been off by 40 percent or more, the cheap seed wasn’t such a great buy after all.

And that’s exactly why the math here is so important. I won’t go so far as to say that every “big name” food plot seed outlet that caters to hunters is going to deliver excellent seed with high PLS numbers. But many of them will and there is definitely something to be said about a product created by hunters for hunters.

Nor will I say that most “bargain” outlets are going to deliver inferior seed with lower PLS figures. But some certainly do.

The point? Don’t rely on marketing hype to find a good value. It’s quite possible to save a chunk of change simply by doing some research, shopping around, and creating your own blends.

Just do the math.