I suspect that I’ve been hit in the head about as often as any person not playing in the NFL... 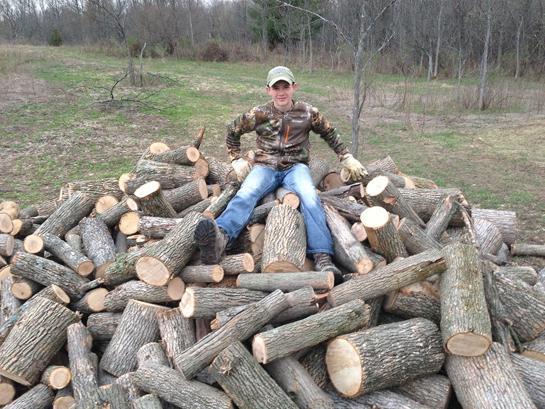 I suspect that I’ve been hit in the head about as often as any person not playing in the NFL or NHL has been. I took my sports seriously as a kid and was never one to shy away from an opposing player in football. I wasn’t a particularly big hitter but I was an opportunistic one.

My football-playing days are long gone (and oh I miss them) but I still play hockey during the winter months and while the big, booming hits aren’t commonplace, there’s still plenty of contact.

As a kid, I had a dirt bike and always seemed to be doing things that led to ample bruises, frequent loss of blood and just enough bodily harm to know a thing or two about pain. I still bear a scar on my head from an errant upward swing with a hammer. Yeah, that hurt.

But as I lay on the ground last week trying desperately to keep from blacking out, I knew one thing was very, very certain: I had never been hit in the head even half as hard as that limb had just hit me.

Before relaying the story of my own stupidity, I want to set things up here and, hopefully, stem the tide of “this guy is an idiot” comments.

The author’s son, Noah, sits atop the fast-growing pile of firewood, and provides plenty of reason for him to obey safety recommendations when doing management work in the future.

For starters, those of you who have followed the first two entries in the Micro Manager series know that I’ve been completely open and honest about my level of experience with in-depth habitat work. I’m a novice. I’ve never pretended to be anything else. I do have a background in wildlife management, took some forestry classes in college, and spent a good chunk of my childhood hauling firewood and handling a chainsaw.

But that’s a far cry from knowing exactly how to turn a piece of ground into prime whitetail habitat. I’m learning and am very willing to improvise, to find solutions and – most importantly – to share those experiences with you.

As I stated in the very first post: I’m going to make mistakes along the way. And I’m going to share those with you. That’s part of the charm here. We are going to learn together. The point to all this is to illustrate that you can do things yourself even when on a limited budget, when dealing with a very small parcel of land and relying on nothing more than free resources found online, in books and magazines.

Yes, I’ll make mistakes. And I had just made one. One that damn well could have been my last.

I could simply keep this tale a secret. Honestly, I was thinking that I would. I’d save face, spare myself the comments that will follow and perhaps prevent myself from looking like a fool in the eyes of the readers I am trying to serve. But to not share this story would mean that I’m not delivering what was promised.

So here’s what happened.

Life and Limb
For the past two weeks, I’ve spent every spare hour I can muster trying to do as much timber stand improvement as I can on Noah’s Farm – the 17 acres of land that is the focus of the Micro Manager series.

The property lacks bedding and security cover. The best way to create such cover – according to every source I’ve read – is by managing the existing woodlands through standard timber stand improvement techniques and hinge-cutting.

The goal is simple: Replicate the impacts of natural fire by removing undesirable mature trees in the woodlot. Doing so will open up the forest canopy and allow for new growth on the forest floor. This will create that thick, gnarly cover that deer prefer for browse, bedding, security, and travel.

In my area of southern Michigan, the emerald ash borer – an invasive, non-native beetle first discovered near Detroit in 2002 – has decimated ash trees. The vast majority of timber on my land is ash and, best I can tell, about 95 percent of all ash trees are dead because of ash borer damage.

The good news? The ash borer has done a very effective job at eliminating a large number of mature trees. The resulting loss in overhead canopy cover means the forest floor will soon be bursting with new growth. Like it or not, much of the timber thinning has already been handled by ash borers.

The bad news? All of those dead ash trees are a very real safety threat. Ash trees impacted by ash borers die because the larva of the bugs live under the bark of the tree and hinder its ability to carry water and nutrients up the tree. The trees die from the bottom up. Which means large, fully mature trees that have good, solid wood up top will have a stump that’s crumbly and rotten. And that, folks, is the recipe for a woods loaded with widow-makers.

Although the dead trees still have some value as firewood, that value is fading fast as the trees rot. Rather than wait for them to fall on their own – potentially while my son is hunting or walking through the woods – I decided to be proactive and remove them.

As mentioned earlier, I’m no stranger to chainsaw work or cutting firewood. But falling a couple dozen mature trees in a woodlot with a lot of other trees in the way isn’t something I’ve done a lot.

To prepare for the work, I read as much about falling trees as I could. I learned about falling cuts, the use of wedges and how to “roll” trees using calculated cuts in an effort to get the trees to fall where you want. I also read plenty about the dangers associated with falling trees – particularly those with dead limbs. And about the recommended safety gear.

Armed with that knowledge, I went to work and heeded as much advice as I could. But some advice – notably that regarding safety gear – I ignored. That’s something I’m ashamed to admit. But it’s the truth, and I suspect many of you reading this have done the same.

I don’t know how many trees I had on the ground. I guess it was about a dozen or so. Many had fallen just as planned. More than a few hung up halfway down and required some serious thinking, planning, and effort to get safely down. But I did it and was starting to feel pretty good about myself.

Finally, I was tackling the biggest tree yet. It was about 24 inches across and very clearly the victim of ash borers. The bark was covered in the telltale white, sawdust-looking spots. The treetop displayed plenty of dead limbs and no new buds. It was dead and needed to come down.

I made a large falling notch and began the back cut that would topple the tree.

As soon as the gap the saw blade was cutting began to widen – an indication that the tree was beginning to tip – I pulled the saw out, flipped the engine off and quickly jogged at an angle away from the tree.

The saw landed about 8 feet from me. I was driven to my knees and must have crawled another 10 feet or so. Lying beside me was a dead limb about 6 inches in diameter and as solid as a Louisville Slugger. I have no idea where the limb came from or how far it fell. I know only this: It hit me flush on the top of the head.

My eyes were instantly blurry and I started to see that TV static image that happened on the previous two times that I’ve been concussed. I remember thinking that I had forgotten my cell phone at home and that if I blacked out, I could be in a world of trouble.

So I simply stayed on my knees taking deep breaths and doing what I could to make my eyes uncross. After a few moments, my head started to clear and I took an inventory.

My head hurt like blazes and my neck felt like it was three inches shorter. But my legs worked, my arms worked, and I could recite my name, address and phone numbers. I figured that meant I was okay.

Lesson Learned
I had intended for this week’s entry to focus on the do-it-yourself tree shelters I’ve been making to protect the seedlings I recently planted. They’re pretty cool and saved a ton of money. I also wanted to focus a bit more on hinge-cutting and my reasons for doing such extensive timber work. It’s a critical part of the habitat project and deserves attention.

But when that limb cracked me on the head, I realized that the work I’m doing can be dangerous. I suppose I knew that in the way we know seatbelts in our trucks can save our life. And yet we often need that annoying chime to remind us to put them on anyway. But once you get in a car accident, putting on a seatbelt becomes an conscious decision.

If the purpose of this series is to provide average guys like me with some help making their dreams come true, then I owe you the truth. All of it.

The Micro Manager series is focused on doing things that most hunters can do. And it’s written not by a guy who manages thousands of acres or has thousands of dollars of equipment. No, it’s written by me – a guy with a limited budget, a lot to learn and a desire to make my dream a reality.

And so the entry about those tree shelters will have to wait a week. And we’ll put off for a bit our conversation about hinge-cutting and timber stand improvement.

Until then, I’ll leave you with this.

That’s a link to the OSHA recommendations for cutting and trimming trees. Read them. Follow them. Be safe.

I had a grand vision of the “great” lesson from the Micro Manager series being a photo of a big-bodied buck that was tagged on Noah’s Farm. It would provide validation that small parcels of land can be productive and that DIY, low-budget habitat enhancement is possible.

But I think the greatest lesson of the series has already been delivered. I made foolish mistakes by not wearing safety gear, cutting on my own, and not brining a cell phone with me. Those errors could have been fatal and I won’t make them again. If even one of you reads this and avoids making the same mistakes I made, then the series will be a success indeed… Even if I don’t see a single deer on Noah’s Farm this year.