Trail cameras that send images to the user via email or text message–known as “wireless” cams–have been around for years.... 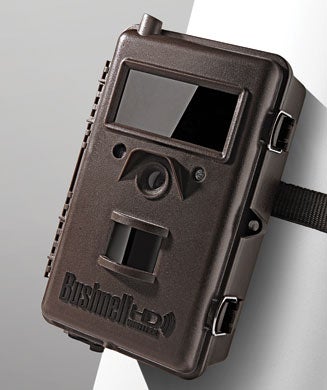 Trail cameras that send images to the user via email or text message–known as “wireless” cams–have been around for years. While they have the potential to be useful tools, they’ve also been fraught with issues, including weak networks and prohibitively expensive contracts.

Bushnell promises that its new Trophy Cam HD Wireless ($600; bushnell.com) will not suffer the shortcomings of its predecessors because it operates on AT&T’s 3G network, ships with a SIM card, and features pay-as-you-go plans. I recently got my hands on one to see if this really is a revolution in remote game management.
**
Image Transmission**
Thumbnail images can be viewed via text or email, or on a free app. I reside in an area rated with excellent coverage, and even so a few images failed to reach my phone.

Quality of Image
The high-res daytime photos shot by the 8-megapixel camera were frame-it-and-hang-it quality. Nighttime images were typical of any infrared camera. It also records exceptional HD video.

Detection Zone
The unit boasts 32 black no-glow LEDs and a revamped passive infrared sensor with a 60-foot range. I didn’t receive a single nighttime photo of a deer gawking at the camera.

Trigger Speed
If this camera has an Achilles’ heel, it’s the 0.6-second trigger speed. It failed to consistently center subjects in the frame during testing. That said, it’s twice as fast as many existing wireless cams.
**
Ease of Use**
This unit is insanely user-friendly. Install the batteries, insert an SD card (up to 32 GB), hang the camera, and take a test image. The Trophy Cam app lets you change settings from your phone.

Battery Life
You can expect approximately 3,000 images on a single set of 12 AA batteries. This is significant, as most other wireless models don’t come close to that figure.

Durability
Our test happened to coincide with a merciless ice storm. The Trophy Cam remained intact and kept producing excellent images–and transmitting them to my phone–the entire time.

The Final Word
At $600 a pop, you’re probably not going to buy a case of these to hang all over your farm. But it’s durable, easy to use, and captures high-quality images and video. Most important, its image transmission system appears to be a serious upgrade over those of existing wireless cams.