The clouds are growing darker by the minute. I’m about to get wet. Really wet. And I care not a... 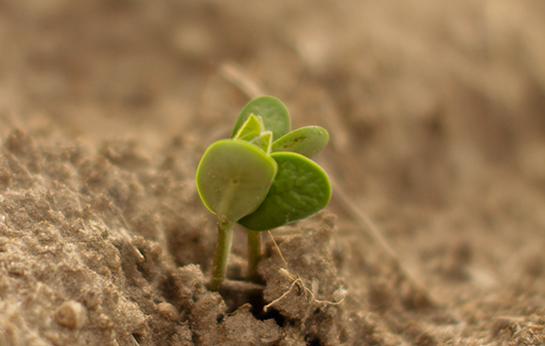 The clouds are growing darker by the minute. I’m about to get wet. Really wet. And I care not a bit.

After a winter that seemed like it would never end followed by a cold, dreary spring filled with cutting trees and thinking about the things I wanted to do “when it warms up,” I’m finally putting seed in the ground. And I’m not slugging through snow to do it.

I wasn’t able to close on the 17-acre property I’ve deemed “Noah’s Farm” until late last summer, which only left time to put in a couple of hastily-prepared patches of oats, radishes, and clover.

The clover, to be honest, was an afterthought. And, man, am I glad I added it to the mix.

I knew as soon as I hit the virgin ground with a PTO-driven tiller last summer that I’d have my work cut out for me if I ever hoped to have a viable, food plot program on Noah’s Farm because the dirt, in a word, sucks.

Much of the ground is light, sandy and laden with rocks.

That said, last fall’s plots did better than expected though they certainly wouldn’t have landed me on the cover of Today’s Farmer magazine.

The soil PH isn’t awful. It was about 5.8 last fall. What the ground lacks, however, is organic matter. And that’s where the clover comes in.

My goal (which I’ll detail a bit more in a future post) is to not just provide a destination food source for deer this fall but to use strategically-placed “travel plots” designed to direct deer movement throughout the 17 acres by appealing to their stomach and their desire for security cover.

This is not a concept I can call my own. It’s something I read about in Jeff Sturgis’ book “Habitat Success By Design.”

Sturgis, a former Michigander, recently released another book, “Food Plot Success By Design” and its arrival couldn’t have been better-timed.

In both books, Sturgis outlines a method for utilizing food plots in a manner that provides a consistent food source throughout the hunting season and a strategy for laying out those plots in way that will help “steer” deer where I want them to go. The long, narrow plots are oriented in a way that allows me to access stand sites without penetrating the perimeter of the cover. The screening cover hides my entry while also making deer feel safe and hidden.

Does this concept really work? I don’t know. This is my first attempt at it. But it sounds good in theory, and Sturgis has put plenty of good bucks on the ground using it.

But in order for the plan to work, I need the plots to produce forage and the screening cover to grow. And that’s certainly not a given with the quality of dirt I have to work with.

But I’m hoping the clover will prove to be the key.

Earlier this spring, I sent an e-mail to John Barsody of Frigid Forage. I’ve known Barsody for several years and have used his seed blends in the past. It’s good stuff. What I like most about him, however, is his willingness to share his knowledge and experience.

And he recommended planting clover as a “green manure” crop to improve the soil quality. What he didn’t know was that I already had good stands of clover coming up from last fall’s plantings.

So when it came time to work the ground in preparation for this year’s plots, I turned that green clover right under. The green manure method has been gaining quite a following in the world of organic farmers. The concept is simple: Till the crop into the soil and allow it to decompose and create natural fertilizer.

I left a couple of patches of clover standing in hopes that it will feed a few deer this summer and get them used to using the property more.

I then worked about two acres of ground with a rental tiller behind my 1961 Allis D17 and broadcast about ¾ of an acre in soybeans (I used a generic ag-variety of beans bought at my local elevator) during the rainstorm.

My intent is to fence off the patch of beans (though I haven’t yet figured out how to do it and stay under budget). I want to keep deer out of the beans and allow them to mature and produce plenty of pods. I’ll then remove the fence in November to set up a solid late-season food source and, hopefully, keep deer from wandering too far during Michigan’s heavily-hunted gun season.

While planting the beans, I also sowed a mix of Egyptian wheat and sorghum as screening cover that will hide my entrance and exit from stand locations. I also planted several larger patches of the screening mix to see if it might serve as quick bedding cover.

The remainder of the plots? Well, I’m still working on the plan for those. I do know that I want those plots to produce forage that is attractive at varying times of the fall. To do that, I’ll need to plant a blend.

The layout of the travel plots was done in a manner meant to “steer” deer around the property using natural terrain features that deer already follow whenever possible.

With just 17 acres to work with, I simply don’t have the space to devote to a “year-round” food source. Nor do I really want one. And, as any owner of a small parcel will tell you, property-line hunters can wreak havoc on your efforts. So I want to do what I can to create a pattern of travel that keeps deer where I’d like them to be.

I’ve talked with plenty of hunters who seem to focus solely on planting a blend heavy with brassicas. And there’s nothing wrong with that so long as you understand those plots likely won’t see heavy use until later in the fall.

What I want to create are plots that deer will utilize from September through December. And I want those plots to function not only as food sources but as travel funnels as well.

I have to admit, once I’d finished working the areas I could start to see the seemingly far-fetched plan coming together and the flowing ribbons of worked ground actually did seem to create a safe, sensible travel pattern that deer would follow.

Well, it’s time to start really defining the travel corridors I want deer to use. I have some additional screening cover to get in the ground. I need to finalize the plan for the remaining plots. And it’s never too early to start prepping stand sites.

It’s starting to get fun now.