Deer of the Year: The Pumpkin Buck 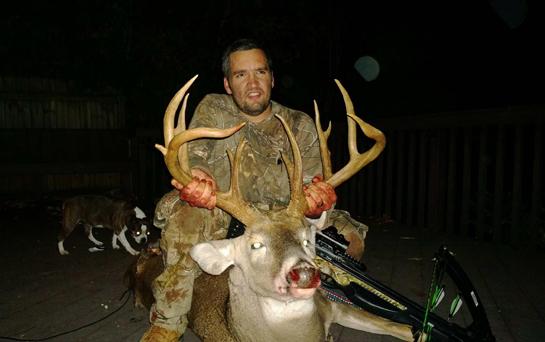 A new hunter might sit in the stand for weeks or months before even coming close to shooting a deer. For hunter Parker Florimonte, it took four years. But his efforts finally paid off when he tagged his first deer on October 29 in Hamilton County, Ohio. Everyone’s first successful hunt is memorable, and Florimonte made sure he’ld never forget his by harvesting this nontypical suburban bruiser in his own backyard.

Although he didn’t grow up in a family of hunters, Florimonte, 32, wanted to learn to hunt. He read everything he could get his hands on–including a subscription to Outdoor Life–and began hunting four years ago. This season Florimonte hunted his own property on the west side of Cincinnati. Two nights before his hunt, he ran out of corn for the feed pile in his backyard. His kids were carving jack-o-lanterns, and he used leftover pumpkin guts instead. Within a day the pumpkin had vanished, and these photos had appeared on his game camera.

Florimonte shared the pictures with a neighbor who also hunts. “We both just sat there sort of awestruck for a few minutes, just trying to count how many points it actually had, and trying to guess the score and the weight of it,” Florimonte said. “And we basically looked at each other and said, ‘We’ll never see that guy again. He’ll never come back.’”

The next evening Florimonte climbed into his ladder stand down the hill from the house. Thick woods and steep ridges cover the property, and Florimonte set up along a trail leading down to a creek 200 yards away. He was still within earshot of his neighbors, however, and he could hear lawnmowers and shouting kids. It was so noisy Florimonte nearly called it quits early. But he decided to sit tight and the neighborhood eventually quieted. At sunset Florimonte heard a deer walking along the trail toward him. When a buck stepped out from a clump of honeysuckle at 20 yards, he was ready.

Florimonte instantly recognized the buck. It lowered its head and began to eat, and Florimonte squeezed the crossbow trigger. “When he took off it sounded like an elephant was crashing through the woods, I mean sticks and trees breaking,” Florimonte said. “I heard one final thump and I could just tell that was him dropping, he was done.”

Florimonte waited 10 minutes before climbing down and heading for the house. He returned a few minutes later with two of his sons. The boys split up and walked down the hill, looking for blood. His oldest son spotted the first drops, and before Florimonte could catch up, his son had already turned the corner and discovered the buck. The bruiser had piled up just 50 yards from the stand.

“Coming around the corner and seeing that massive buck laying there was just indescribable,” Florimonte said in Novemeber. “It was a month ago and I’m still replaying it everyday. It’s a feeling that I don’t think will ever go away.”

The nontypical buck scored 161 inches and a taxidermist aged it at 4 1/2 years old.

“I was ecstatic,” Florimonte said. “After hunting for four years and getting up early and spending the money on some of the gear, and all the time spent away from family–just so much goes into it. I don’t think people who don’t hunt really realize how much it takes.”

The Boone and Crockett Club record books list just two nontypical whitetails taken in Hamilton County. The larger of the two scored 206 7/8 inches and was taken in 1995.