Deer of the Year: The Thanksgiving Buck 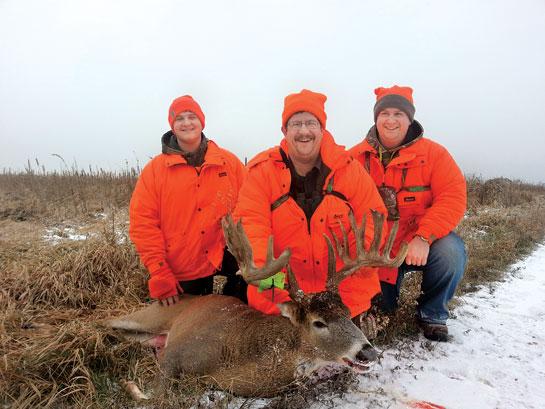 Like so many other legendary deer, Gregory Krapfl’s monster marsh buck fell to dumb luck and great shooting.

Krapfl spent Thanksgiving morning with his two sons hunting Wisconsin’s Horicon Marsh. The wetland is well-known in the waterfowl world—it’s one of the largest freshwater marshes in the country and is a major stop for migrating greenheads and Canadas—but this morning the Krapfls were after whitetails.

Krapfl posted up on a ditch bank as his sons tromped through the cattails hoping to jump a couple does. Krapfl was watching his boys work their way through the marsh when he spotted movement to his left.

“I was probably there for only an hour when I turned around and I look and he’s 100 yards away running right at me,” he said.

Krapfl raised his rifle as the heavy-racked buck came straight at him. At 60 yards, he dropped the buck on a dead run with a single shot.

“At first I just knew it was a buck. Even after I got up to him I didn’t really realize how big he was. My youngest son came up and says ‘You have no idea how big this deer is do you?’”

Krapfl didn’t know it then, but the 6-year-old buck (which scored 192 7/8 nontypical) had become a local legend of sorts. After word got out that Krapfl had killed the deer, hunters from around the area started coming forward with trail camera photos and close-encounter stories.

“I had the deer hanging and for three days my driveway was full of people who wanted to come and see it. Then I knew it was pretty big,” Krapfl says