Last season I got the chance to hunt western Illinois with the Whitetail Properties guys and their buddy Jason Endres.... 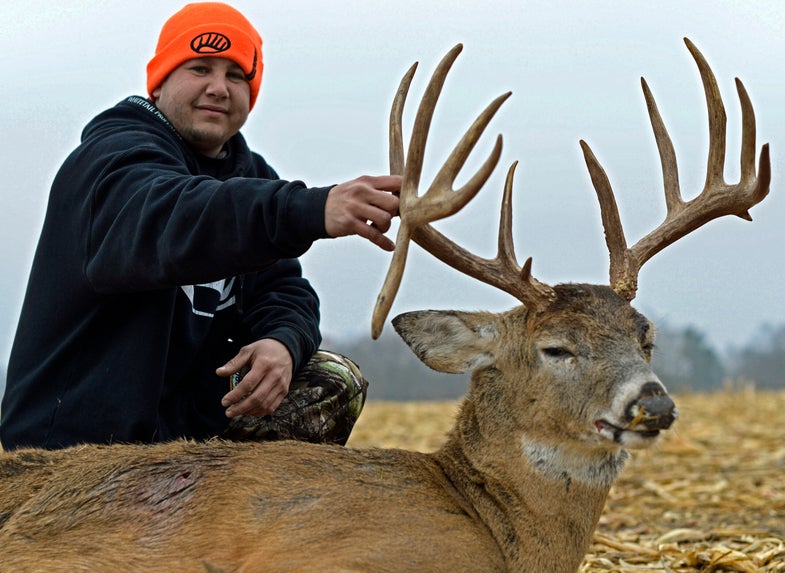 Last season I got the chance to hunt western Illinois with the Whitetail Properties guys and their buddy Jason Endres. After my hunt, they zeroed in on a hot corn field that deer were absolutely pounding during late November, trying to put on weight back on after the rut. They got another buddy, Brett Pomrenke to hunt the field with them and he ended up shooting the monster buck pictured above, which is also his biggest buck ever. Here’s how it all went down.

Brett met up with Endres and land specialist Aaron Milliken for the first shotgun season and intended to shoot a doe. But, Endres and Milliken knew they were on a red-hot field and had recent trail camera photos of mature bucks, so Pomrenke decided to hold off on making meat. It also didn’t hurt that his girlfriend ended up shooting a big doe that weekend, her first deer ever.

On Pomrenke’s third sit, he spotted a solid 8-point headed into the field. At first glimpse, the buck looked like a shooter and Pomrenke got his scope on the deer and settled down for a shot. But after seeing the buck’s rack through the scope he started to second guess himself.

Endres and Milliken were sitting close enough that they could also see the deer from across the field.

“He texted me that he was on a good one, and I could see the buck in the field. I thought for sure I was going to hear a shot,” Endres says.

But, that shot never came. Pomrenke decided to pass on the buck, which would have been among the biggest he’d ever taken.

“I had him in the scope, and he was in the field for 45 minutes. But, after seeing some of the trail camera pictures Aaron had, I knew there were bigger bucks out there,” Pomrenke says. “But then as soon as the buck left the field, I regretted not shooting him.”

Pomrenke got another chance during the second gun season and climbed into a stand over the same cut cornfield. Eventually, he spotted a giant rack coming his way along the timber line. Pomrenke got his binos on the approaching buck and knew immediately that he was a shooter. The buck was walking slowly, angling toward Pomrenke, but eventually it was going to get downwind of him. So when the deer got inside 100 yards, Pomrenke leveled his muzzleloader and shot.

When the smoke cleared, he saw the buck standing there, appearing totally unfazed by the shot.

“He was just standing there, and that freaked me out,” Pomrenke says.

Pomrenke started to reload as the deer walked out of the field. But, just as it reached the timber line, the buck fell over. Endres and Milliken came to check out the buck and help Pomrenke haul it out.

“I didn’t even realize it had a droptine until we picked up his head out of the corn stalks,” Pomrenke says. “We were all pretty happy about it. Those guys have taken some really big deer, but they were just as excited as I was.”

The buck taped out at exactly 170 inches gross. With deductions, the deer won’t officially make book, but who cares about net score anyway?