In all my years of interviewing hunters about their trophy animals, I don’t think I’ve ever come across anyone as... 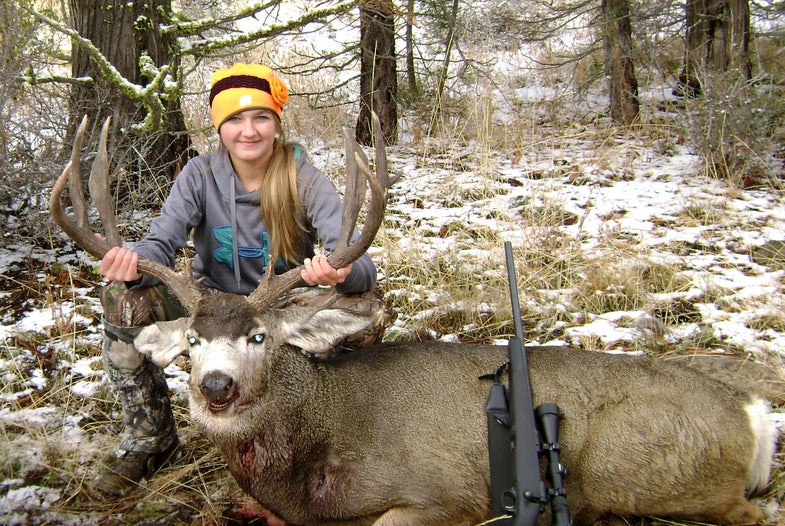 In all my years of interviewing hunters about their trophy animals, I don’t think I’ve ever come across anyone as excited about their accomplishment as 15-year-old Tandie Decker.

Unless it was her father.

The 9th grader’s quest for her first mule deer began years earlier when she put in for her home state of Oregon’s Interstate Youth Hunt. And in the five years it took her to draw the tag, Tandie became quite the accomplished hunter, taking two black-tailed deer, antelope, and ducks—all with her father by her side.

In 2014 she received news that she had been drawn for the coveted tag, and immediately began making plans with her father and family friend Chris. After much planning and scouting, Tandie’s hunt began on Saturday, November 22 in the Dog Mountain area.

“It was real cold,” Tandie recalls, “We spent most of that day driving between blizzard after blizzard. During the gaps we’d see a few deer here and there, but nothing too exciting.”

Excitement did come, however, in the form of a buck Tandie’s father Tom estimated measured 26 inches. “He was a pretty nice 3 by 4 but something about him just didn’t feel right,” Decker said.

Knowing she had a full week to hunt, Tandie passed on that buck. When dusk fell that evening, Tandie and her crew drove the hour and a half back home to Klamath Falls for the night.

The next morning after a hardy breakfast of coffee and chocolate Ding Dongs, the hunting party returned to Dog Mountain to try once more.

Again, they faced intermittent blizzards, slushy rains, and temperatures hovering at about 25 degrees. After a day filled with just a few doe sightings and one coyote, Tandie saw tracks crossing the road before them.

“There were two deer and one of the tracks was sunk into the snow a lot—a lot, real deep,” Tandie said.

The group followed the tracks down onto a side skid road. Her dad was the first to spot the buck, and he pronounced it a good one. Decker explained that the buck was “real tall, and had an almost black body.” Tandie went after the deer alone and after trailing it a ways took a shot at 212 yards.

“I aimed for the neck, but was pretty sure I missed,” Tandie said.

But Tandie’s shot found its mark, and the deer went down shortly after. The bruiser weighed more than 275 pounds and its 5 by 4 antlers carried 29 3/4 inches of bone.

“I was shocked at just how big he was,” Tandie recalled. “I was just so excited at the sight of him that I started jumping up and down, high-fiving my dad and Chris and screaming.”

Her dad was equally excited—if not more so.

“She made a great shot and I couldn’t be happier,” Decker said. “That buck is a whole lot bigger than anything I’ve ever taken.”

To see Tandie’s Deer of the Year entry, click here.

Tandie’s muley buck is eligible for OL’s Deer of the Year program. Upload a photo of your own 2014/2015 buck for a chance to win great gear from Gerber and land your deer on the cover of Outdoor Life magazine.

Can’t get enough big bucks? Check out our photos and video of the most magical time of year: the rut.