“None of them believed it. They all thought I took the pic off the Internet or something.” This is how... 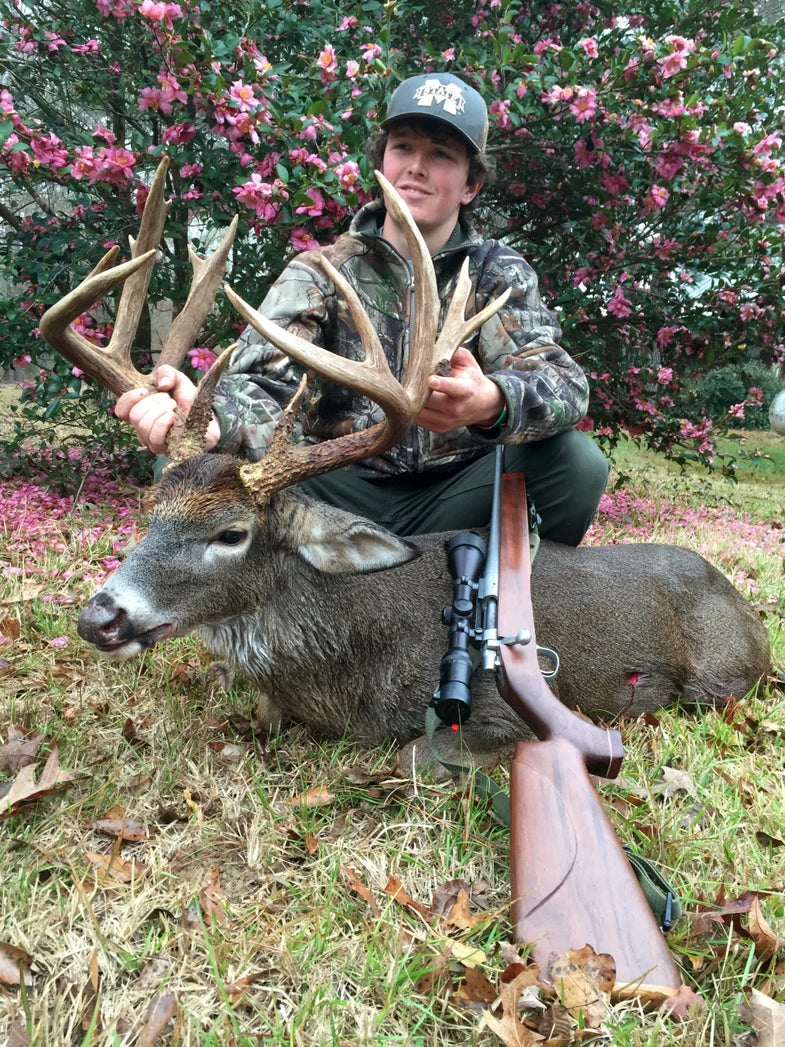 “None of them believed it. They all thought I took the pic off the Internet or something.”

This is how Peyton Barnes described his friends’ reaction to the picture of the bruiser whitetail he took on December 23.

The 19-year-old Civil Engineering major from Mississippi State University killed the 171-inch deer near Port Gibson on property that his family has owned and hunted for generations.

“My dad started managing the 900 acres for big whitetail long before I was born. Food plots, controlled burns. In recent years we’ve really seen some big improvement in the size of our deer.”

Barnes, who has been hunting with his father since he was five, saw evidence of this in 2013 when he first spotted the deer that would later have his friends crying “fake.”

“I saw him at about 250 yards out a year ago,” Barnes recalled. “If it wasn’t him then it was his brother. I didn’t have a shot at him then and I’ve been after him since.”

This led to a lot of time in the stand. Barnes began the quest in October during bow season. By the time gun season rolled around in November, Barnes had taken two does but yet to see a buck of any significance. Then came the morning of December 23.

“It was really, really hot and drizzling. There were mosquitoes all over. Just a gross kinda day,” Barnes said. “I was sitting up in my treestand, just miserable. I was hunkered down in my jacket trying to stay dry and avoid the bugs when I heard a grunt.”

At first, Barnes thought it was a croak from a frog in the water-filled ditch below and to the side of his stand. It was 9:15 and he was more concerned with his father picking him up than frogs grunting. But then he heard the sound again.

“I pulled my head out of my jacket and looked over toward the ditch. I saw a doe coming down the far side of the ditch. There was a spike and a nice 8-point following her.”

Barnes was wondering which of the three deer grunted when he heard what he described as a “deer roar.”

That pulled him completely out of his jacket.

He looked up the hill to where the two bucks had come from to see the buck he’d been after for more than a year.

“Now I’m thinking, ‘Am I gonna get a shot at him or will my dad show up and spook him?’”

Barnes lifted his 7mm and followed the buck as he came down the hill and into a thicket of vine entwined elm saplings.

“I thought he was lost in there but then I saw his antlers through a small hole. I took the shot. It was about 85 yards. The buck rolled out of the thicket and almost all the way down to under my stand. I wanted to get down right away to check him out, but I was shaking too bad.”

Barnes did climb down when his dad drove up only moments later. The elder Mr. Barnes, who’d heard the shot, asked, “What’d you get?”

The buck was a 16-point gargantuan carrying 171 inches of antler. He weighed around 200 pounds and, according to his taxidermist, was about five years old.

Barnes climbed down and answered, “A great Christmas present.”

To read Barnes’ story firsthand, check out his Deer of the Year entry here.

Barnes’ Mississippi buck is eligible for OL’s Deer of the Year program. Upload a photo of your own 2014/2015 buck for a chance to win great gear from Gerber and land your deer on the cover of Outdoor Life magazine.

Can’t get enough big bucks? Check out our photos and video of the most magical time of year: the rut.