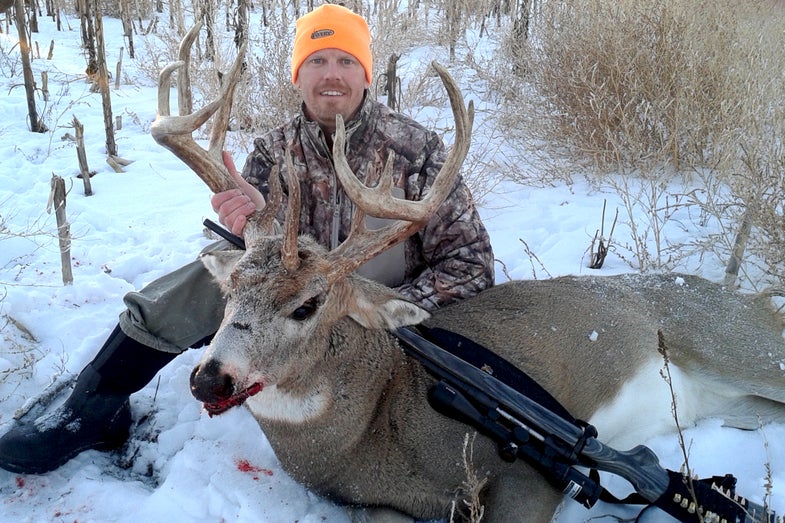 To kill a 170-inch whitetail would be the hunt of a lifetime for most folks. But to kill a 170-inch whitetail with a third “unicorn horn” growing from its forehead? That would be the hunt of two lifetimes. And then, if you could share that entire experience with your father, the man who taught you to love the outdoors? Well, that would just be impossible to put into words. But South Dakota hunter Curt Fischer tried his best.

“It was a pretty special moment, to have him there by my side for this. One I’ll never forget and will always take with me,” Fischer said.

As you can imagine, Curt Fischer’s November 22 hunt was the stuff of legends. Fischer’s dad decided to join him on this hunt, so things were off to a great start.

Fischer explained: “We haven’t gotten to hunt together in years. And although he didn’t have a tag, he decided that he’d come hunt with me…I was just happy to have him by my side. Whether we saw deer or not, it really didn’t matter.” Luckily for both of them though, they did see deer. Or one deer, I should say.

Leading up to the season, Fischer had a particular buck on his mind. A “unicorn buck.” The season before, Fischer had a close call with this deer, but decided to pass on him, despite his nearly 150-inch frame and two-inch unicorn point in the center of his forehead.

Fast forward to 2014, and the unicorn buck was back on trail camera. But this year, he most certainly wouldn’t get a pass.

On the morning of November 22, Fischer and his dad climbed into a tree positioned between a standing sunflower field and a tree belt cutting across an abandoned farm homestead. Fischer’s outpost overlooked a trail that cut right in between the two, and about 30 minutes after daylight a large-bodied deer emerged from the flowers.

“I knew it right away”, Fischer said. “I glassed him, grabbed Dad and said ‘That’s the unicorn buck!’ I was just stunned.”

The heavy-horned buck slowly made his away along the trail that would eventually pass right in front of them. Fischer readied himself for a shot, but as for his dad? “He didn’t say anything. He just sat back and kinda let me do my deal. I think, looking back, he just did that to keep my nerves from going crazy.”

Eventually the buck got to about 120 yards, stopped and looked around. Fischer decided this was his best opportunity, so he got the crosshairs on the buck’s chest, pulled the trigger, and watched the buck hit the ground right there. He didn’t move.

Fischer grabbed his dad, shook him, and exclaimed, “I just shot the unicorn buck!” This time, his dad was ecstatic. A few minutes later, the two of them walked up on the deer, and were surprised to find him even bigger than they thought. The buck ended up rough scoring at 170 inches, and the unicorn point measure 7 1/2 inches.

Later that day, after hauling the buck back to the truck, Fischer got to share this special moment with his two young daughters as well, both of whom he says are future hunters.

Sure, big bucks are great—especially unique ones that have been pursued across multiple seasons. But this story is also a reminder that, ultimately, it’s the people you share these moments with that make one day’s hunt last a lifetime.

As Fischer said, “I don’t know if you could top this. Not just because of the deer, but because of how it all happened, who I was with, and who I got to experience it with later…you just couldn’t draw it up any better.”

No. You certainly could not.

Fischer’s buck is eligible for our Deer of the Year program, and so is yours. Upload a photo of your own 2014/2015 buck for a chance to win great gear from Gerber and land your deer on the cover of Outdoor Life magazine.