It’s a feeling that many of us, unfortunately, have experienced in our own lives. The shame. The heartbreak. The despair... 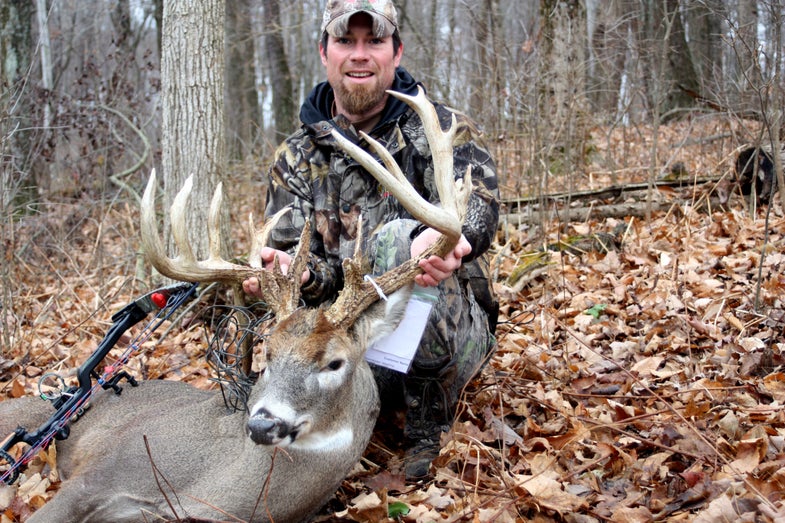 It’s a feeling that many of us, unfortunately, have experienced in our own lives. The shame. The heartbreak. The despair of hitting and wounding an animal, but not being able to recover it. And at the age of 20, Dan Aquino experienced this messy wave of emotions after losing a huge Boone & Crockett-caliber 12-point he’d hit in the shoulder. Years later though, during the 2014 season, Aquino finally got a second chance.

After moving to a new home in central Ohio, Aquino immediately began hearing rumors of a 20 point buck with a drop-tine roaming the woods nearby. He was instantly intrigued.

“As a long-time bowhunter and outdoorsman, I’d heard stories like this before. Some you believe, some you don’t,” explained Aquino. “But I really wanted to believe this one.”

As time went on, word of the local legend continued and soon Aquino heard that a number of other local hunters and even a nearby outfitter had seen the buck. But it wasn’t until October of 2014 that Aquino finally got a look at the monster himself. 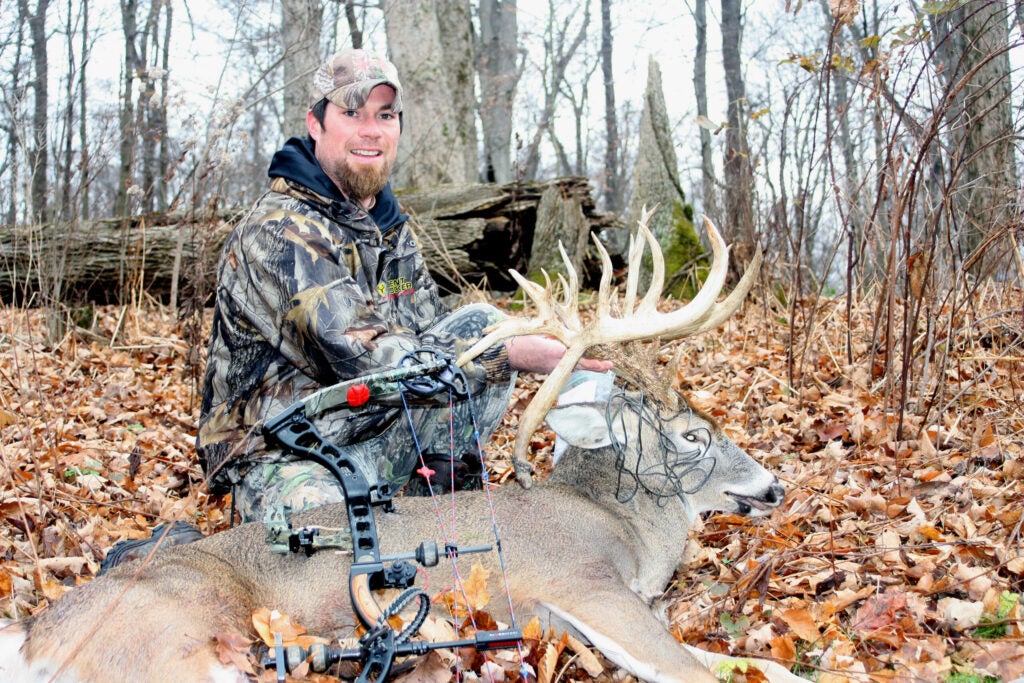 The morning of October 24 was horribly windy, and while Aquino had planned to hunt that morning, he decided to hold off and wait for a break in the weather. Still, curiosity got the best of him and later that morning he and his wife drove to the outskirts of his property to watch a terrain funnel from a distance through his binoculars. What they saw was both exciting and horribly disappointing.

After watching a steady parade of does and younger bucks move through that morning, Aquino’s wife suddenly let out a cry of surprise.

“And then I looked over and I knew right away,” remembers Aquino. “We saw the drop tine and the enormous rack and we were just floored.”

The problem was that Aquino wasn’t in his stand. Because moments later, the heavy-horned brute passed within 40 yards of the tree that Aquino would have been hunting if he’d stuck with his original plan.

Several weeks later and Aquino still hadn’t gotten a crack at the buck, despite spending plenty of time in the woods. But now things were about to get much more serious. The rut was nearly swinging, and Aquino had one more day of work until his vacation during the rut. But that same day, he got a text message at work that changed his plans. On his phone was a trail camera photo of the monster buck—on someone else’s trail camera—in broad daylight.

“I was really freaking out,” recalls Aquino. “I just thought, oh my gosh, he’s out at 4:30 in the afternoon. And I knew those other guys were probably out there after him… Later that day I told the guys at work that I needed to start my vacation early.”

So Aquino got to hunting. And while the action was picking up, he still hadn’t laid eyes on the buck. His trail camera pictures kept him excited though, as the big boy showed up day after day—but always at night. Finally, on November 11, things changed.

The morning hunt that day was dead, so Aquino came out of the woods to have lunch with his son at school. But by 1 p.m. he was back in a tree and waiting. And waiting. And waiting. It was warm, windy, and slow. But just as Aquino was about to text a friend about how bad the day was, he glanced to his side and saw a deer.

“Right away I knew it was a big one, but I didn’t know for sure if it was him.”

Several does were walking ahead of the buck. As they approached Aquino’s mock scrape, he began to prep for what looked to be an imminent shot. And as the buck passed behind a cluster of trees, he slowly drew back and watched the deer walked right in toward his scrape.

“Just as he got to the scrape, he just looked right up at me. I hadn’t moved or anything but he looked right at me. And I didn’t have a shot. I didn’t want to force anything though, and I think I was remembering back to the missed opportunity years ago, so I held off.”

But finally the buck looked down and moved just enough to provide a shot, and moments later Aquino’s arrow flew true. The wide-racked deer ran off a short way, and after a second shot, he laid down and died within sight of Aquino’s stand.

As exciting as this was, the next few minutes were bittersweet for Aquino.

“It was a moment in my life I will never forget. It was a dream come true, but there were also mixed emotions. This was a goal of mine and something I wanted to do, but seeing a deer like that die, that was hard, too.”

On top of that, Aquino also could finally bury the demons of the giant he had lost years before.

“I finally put the past behind me, and that was hard, because that really bothered me for a long time, to have injured that earlier buck and not recover him. That’s all I thought about for weeks. But now, to have done this, it was just a huge sigh of relief.” 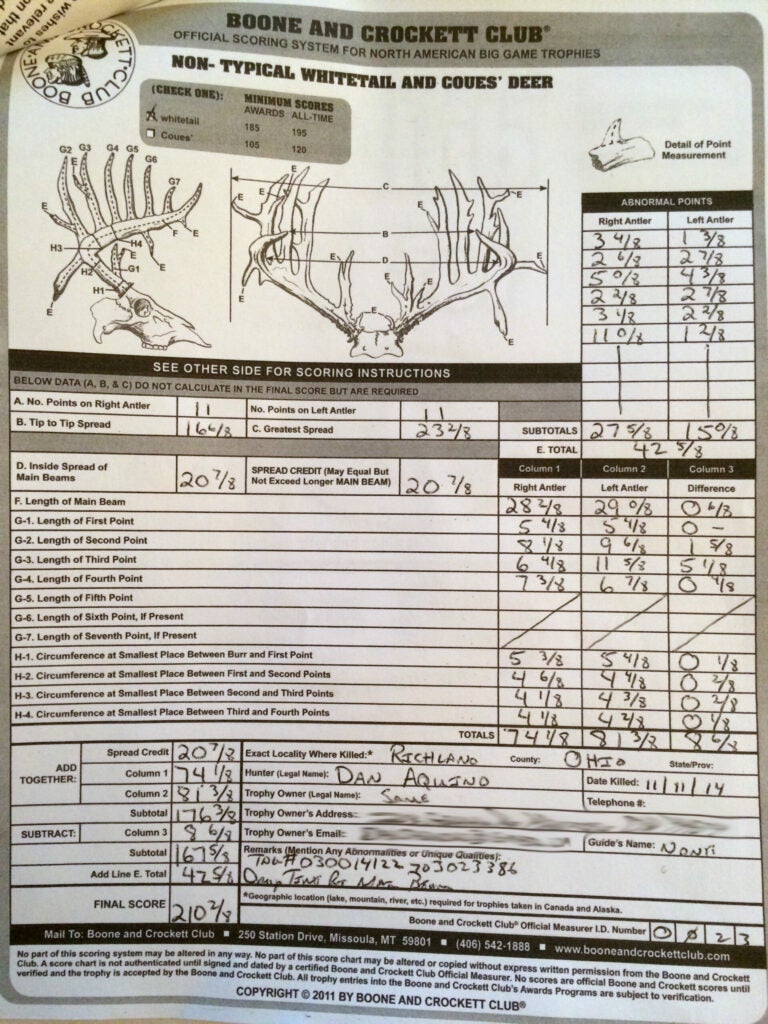 Aquino’s buck is eligible for our Deer of the Year program, and so is yours. You can check out his entry here. Upload a photo of your own 2014/2015 buck for a chance to win great gear from Gerber and land your deer on the cover of Outdoor Life magazine.