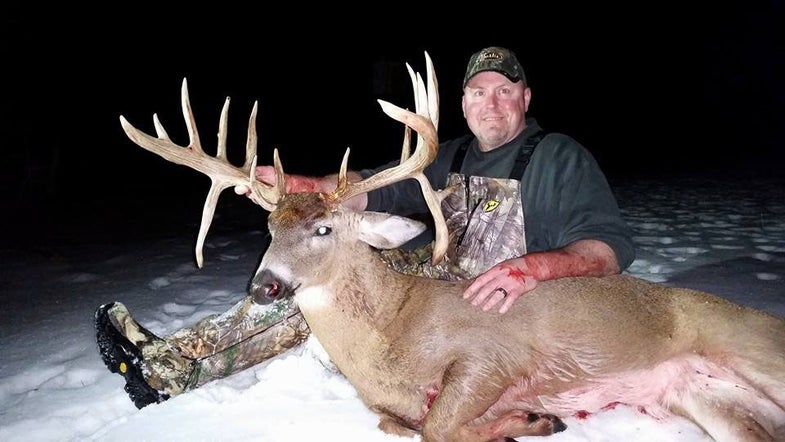 In 2011, the buck was a heavy-horned symmetrical 8-point. In 2012 he added a drop tine. And then, in 2013, he added a matching drop tine on the other side. Bill Wilson had his heart set on the double-drop monster Ohio whitetail, but on January 12, 2015, he got some bad news. A neighbor had shot him and Wilson’s three-year hunt was over.

“I felt a little bit ripped off. I’d been after him for three years, and now someone else got him.” Wilson was feeling down, but as often happens with married men, his wife picked him back up. “She told me I needed to get back in the woods, and so on the evening of January 19th, I did.”

Heading out that evening, Wilson still had high hopes, as earlier that year he’d caught another giant drop-tine on trail camera. But this buck never showed up during daylight, and seemed to have a knack for appearing on trail camera about 30 minutes after dark.

That night though, luck was on Wilson’s side. As he got settled into his stand he heard gunshots from the direction of a neighboring property, near where Wilson believed the giant was bedded. It sounded like someone was having a little fun with target practice, and soon after, a flash of movement appeared from that direction.

“There was snow on the ground and when I saw the buck, I instantly knew it was him, [the new buck],” recalled Wilson. But just as soon as Wilson took notice of the buck, the deer noticed him, too.

“He looked right up at me. We were in an eye-to-eye lockdown and I realized I wasn’t breathing,” said Wilson. “I tried to get a breath without moving, but I almost coughed. And I remember thinking that if I blew this now, it would be just horrible.”

Fortunately, Wilson was able to catch his breath, and when the buck stepped in to range at 17 yards, he let his arrow fly and watched it pass right through.

At this point, a million thoughts were running through Wilson’s mind. How far did he go? Where did he fall? Was he on someone else’s property? Was someone else tagging him? He wanted to get down right away, but he knew better and gave the deer time.

When Wilson finally did climb down to search for the deer, he didn’t have to wait long to see his trophy. Only 60 or 70 yards down the trail, he saw the once-in-a-lifetime buck lying in the snow.

“I just stood there in disbelief, saying no way, no way,” remembers Wilson. “And then the first thing I did was call my wife. And the first thing she said was that I was a liar! I had to send her a photo as proof.”

Although improbable, it was true. His original target buck had been killed by a neighbor, but now only seven days later, Wilson had killed an even bigger deer. With double drop tines of his own, this buck unofficially gross scored 198 inches and is easily the biggest buck of Wilson’s life. Regardless of size though, it was the experience of the hunt and all his past hunts that keeps Wilson heading back into the woods.

“This is why I like to bowhunt. Just being able to put myself close to these deer. I really appreciate all aspects of the hunt and the animal.”

Wilson’s buck is eligible for our Deer of the Year program, and so is yours. Upload a photo of your own 2014/2015 buck for a chance to win great gear from Gerber and land your deer on the cover of Outdoor Life magazine.