Big Bucks Return, Were They Ever Really Gone?

We’re almost done with the “October Lull,” the term used to describe a few weeks in mid-October when bucks break... 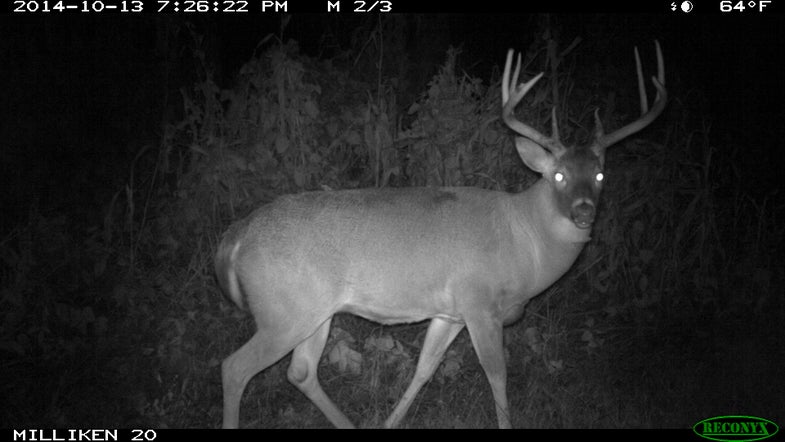 We’re almost done with the “October Lull,” the term used to describe a few weeks in mid-October when bucks break their summer patterns, but haven’t started rutting yet. During this time, it’s pretty common for the bucks you’ve been watching all summer to seemingly disappear.

But, I’m having the opposite experience with the property I’m hunting in western Illinois next month. In the last few weeks, more bucks are showing up on trail cameras, including a nice 8-point that had gone ghost by mid-summer. Now he’s showing up regularly on a few of the trail cameras placed around the 240-acre property (read about our previous trail cam and food plot troubles here).

Aaron Milliken, the Whitetail Properties land specialist who is hunting with me, suspects the buck never went all that far in the first place. As we were hanging stands, setting trail cameras and planting food plots, he probably got nervous and either slipped off to a neighboring property or just laid low for a little while, Milliken says. Earlier in the summer a series of trail camera photos captured the buck spooking off. Then recently, we got a series of photos of the buck sparring with a younger deer and looking totally relaxed.

“It is fairly common for bucks to disappear for extended periods. In Illinois there is no baiting allowed, so it’s much harder to get consistent pictures of mature bucks unless your cameras are placed perfectly,” he says. “Many times a buck that you thought left the property simply has just avoided your cameras. In some cases bucks do disappear, sometimes for a couple years or months, but then re-appear during the rut or right before the rut. It’s also common for mature bucks to show back up for late season if you’ve got ample food sources.”

The takeaway here is to be patient this time of the year when bucks aren’t doing what you thought they would. Changing your game plan up can pay off, but you don’t want to get ahead of yourself before the best action starts.

“All a guy can do is be patient and keep hunting the property on the correct winds if a target buck seems to disappear. People get themselves in trouble when they panic and hunt a property too aggressively,” Milliken says.