Virginia’s recent decision to ban the use of natural deer urine when hunting or scouting has hunters asking: “What’s going... 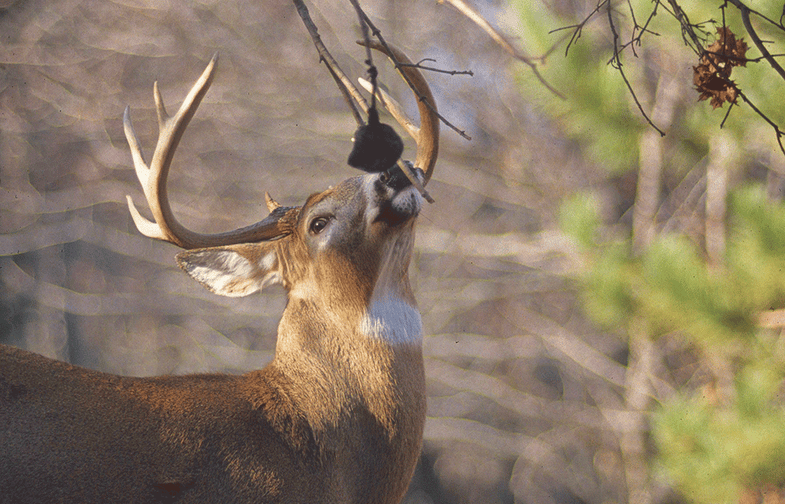 Virginia’s recent decision to ban the use of natural deer urine when hunting or scouting has hunters asking: “What’s going on? I’ve been using deer urine since I was a kid.”

What’s going on is Chronic Wasting Disease (CWD), the killer deer disease that has worked its way through North America’s deer and elk herds. Wildlife agencies are taking steps to control the spread of CWD and outlawing deer urine attractants is one of those steps (Vermont has also banned it).

Tracing the Spread
CWD was originally discovered in captured deer in Colorado in the 1960s. It was fist discovered in wild deer in 1981. It’s been with us ever since. The disease has now been found in 20 states (including Virginia) and two provinces and is commonly perceived to be the number one threat to deer herds today. Symptoms include: erratic behavior, a weakened condition, excessive saliva, dramatic weight loss, and extreme thirst. Stopping a CWD outbreak from spreading has proven next to impossible even though millions are spent on CWD containment.

CWD is believed to be caused by defective or rouge proteins called prions, which are thought to be passed from animal to animal. Prions attack the brain; it is always fatal. Infectious prions have been detected in the saliva, urine, and feces of diseased deer and some scientists believe CWD may be spread through contact with these liquids. That’s where the urine-based attractants come in.

The Urine Connection
Much of the deer urine used in attractants comes from commercial deer farms. The farms collect urine in catch pens with a grated floor that funnels deer waste into a receptacle. Multiple deer use these pens at the same time, comingling urine, feces, and even saliva. CWD is often associated with captive deer herds, which could be infected with CWD.

Captive deer herds are generally monitored for CWD by either state or federal agencies. Conscientious urine suppliers take numerous precautions to ensure their herds are CWD free, but there are no absolute guarantees that any given captive herd (or for that matter wild herd) will remain CWD free. Unfortunately, there is no real way of determining if the deer contributing the waste liquids are carriers of the disease until it is too late.

“Prions are shed in the saliva, urine, and feces just months after a deer becomes infected,” says Dr. Krysten L. Schuler, a wildlife disease ecologist at Cornell University’s College of Veterinary Medicine. “That deer will still look perfectly healthy and it can live for more than a year after it’s infected. That deer’s infected urine may be gathered at any time. The trouble with these prions is they bind to soil particles and can be taken up into plants. This allows prions to contaminate the environment for years after they are poured out of a bottle. There is no safe dose of prions.”

She urges hunters, “not to risk contaminating your favorite hunting spot with a product that has the potential to introduce a disease into your deer herd. When it comes to CWD, prevention is the only proven strategy.”

Wait, Not So Fast
Dr. Nicholas J. Haley (DVN, PhD) at the Department of Diagnostic Medicine and Pathobiology at Kansas State University, is not quite convinced that deer urine attractants are a serious CWD threat. He points out that infected urine is significantly less likely to transmit CWD than saliva and points to published and unpublished research that identifies a low level of infectivity in deer urine. He also points to mitigation efforts by deer farmers to ensure captive herds are CWD free.

“That will go a long way toward reducing the risk to near zero,” Haley says. “Farms providing urine to the scent companies have very strict standards of health to uphold.” That said, he states: “There is obviously some concern for the potential that scent urine may have some role, however small, in the introduction of CWD to new areas.”

The scent industry is concerned, that much is certain. Phil Robinson, president of Tink’s Hunting Products states: “In all of our searching and communicating with experts, we are aware of only two published studies suggesting any possibility of a link between CWD and urine and CWD transmission. Both studies involved experimental and artificial/extreme protocols (injecting brains of mice with infected urine) that are clearly not present during normal use of a hunting scent”.

Sam Bergeson, Vice President of the Wildlife Research Center, points to the extreme protocols of the studies even though they identified a weak connection between CWD-infected urine and mice getting the disease when injected with it.

“Obviously deer hunters are not going around injecting urine into deer brains with a hypodermic needle,” Bergeson says.

Industry leaders are quick to note that there are dollars and jobs at stake, and that hunters are being denied products they have been using for decades. The deer urine industry is asking: “Is there really sufficient data available to shut a whole industry down?”

Terry Rohm of Tink’s put it this way: “If we had some real solid evidence, that would be another matter. No one wants to see CDW spreading all over the landscape. The whole hunting industry is deer driven. We need deer. But there is just nothing out there to justify taking deer urine attractants off the market.”

Hunters seem to be unsure of where they stand on the urine-elimination issue. A recent poll of members of the newly formed National Deer Alliance (a national deer hunters group) indicated that a full 83 percent of respondents either did not know or did not believe urine based attractants are a real threat to wild deer. The same poll found that 42 percent of the respondents were against making them illegal.

Better Safe Than Sorry?
At this point, it may be safe to say what we don’t know about prions, deer urine, and the spread of CWD outweighs what we do know.

However, the Virginia Department of Game and Inland Fisheries’ position is printed in black and white on its website: “The VDGIF is taking a pro-active approach on this issue and has banned possession and use until it is proven that prions are not spread in commercial deer urine products, rather than continue to risk introducing CWD to new areas until it is confirmed that urine attractants do spread prions.”

A cautionary position to be sure, but wildlife agencies are the keepers of the public trust when it comes to wild places and wild things. Is it really surprising where Virginia officials (and before them Vermont officials) landed on this issue?

So where do you stand? Your state may very well be discussing a urine ban as you read this. Are you in the “pro-active, safe not sorry camp” or the “wait, not so fast” camp?

Editor’s note: Craig Dougherty is the Executive Director of the National Deer Alliance.

They should be banned.

They should NOT be banned.