Deer of the Year: Monster in the Quakies

Chris Simpson has hunted with his dad and his friends in the mountains of Colorado since he was a little... 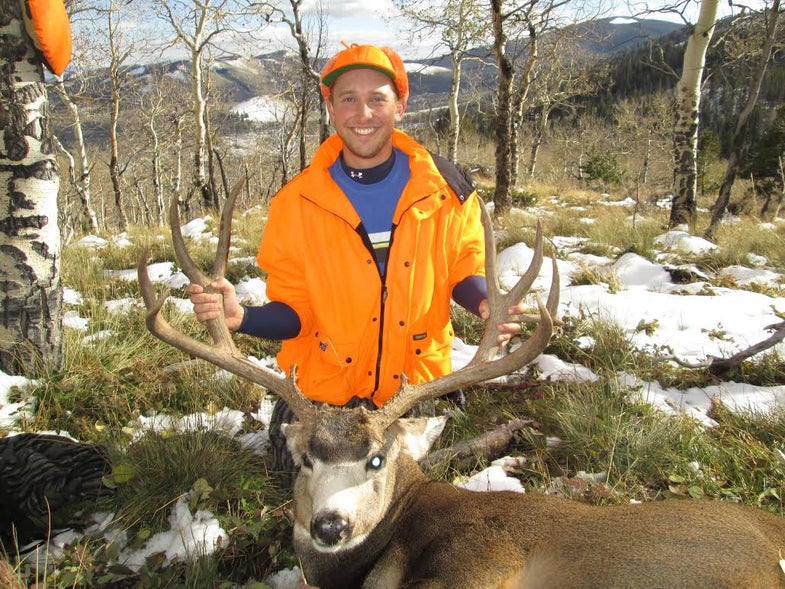 Chris Simpson has hunted with his dad and his friends in the mountains of Colorado since he was a little kid, but at 25 years old, he’d never taken a mule deer buck. So Simpson headed out early for an afternoon sit last fall during the second rifle season, hoping to end the drought. One of Simpson’s hunting partners had a game-activity chart that indicated peak time would be midafternoon. Simpson decided to give it a shot.

His dad had already taken a bull elk, and his friend had killed a muley buck during the first two days of their five-day tent-camping trip. Like any good Western hunter, Simpson had spent a good deal of time helping to pack out his partners’ animals. But now he was perched on a ridge at about 9,000 feet, glassing a valley and an adjacent hillside covered with quaking aspens. He sat in a favorite spot he had hunted many times over the years. They had nicknamed it the “Bunker” because of the big pile of boulders that gives a hunter a natural hide amid the terrain in which to sit and glass.

After about 30 minutes, Simpson spotted a buck moving through the quakies 350 yards away. The deer was on his own and seemed to be carrying a heavy rack. He meandered his way through the trees, slipped down the hillside, and then disappeared into the valley below.

“I couldn’t see him anymore and I thought, ‘Oh, crap. I just blew my shot on this giant deer.’ But lo and behold, a couple of minutes later he popped out and was walking directly at me,” Simpson says.

At that point, he knew the buck was definitely a shooter, but with the deer headed right to him, he didn’t rush a shot. He waited until the buck closed to 50 yards, then 40 yards, then 35 yards before he finally fired. He hit him square, and one insurance shot put him down for good.

“I didn’t know he was quite as big as he was. When I got up to him, he was just giant. It was very, very exciting—especially since it was the first buck I’d ever shot.”

The buck had an impressive 35-inch outside spread. Simpson never had the rack officially scored, but he says it grosses in the upper 180s.