Deer of the Year: Public-Land Stud

DEER OF THE YEAR: ENTER YOUR 2014/2015 BUCK HERE Iowa Painstaking map work and boots-on-the-ground scouting result in a 19-point... 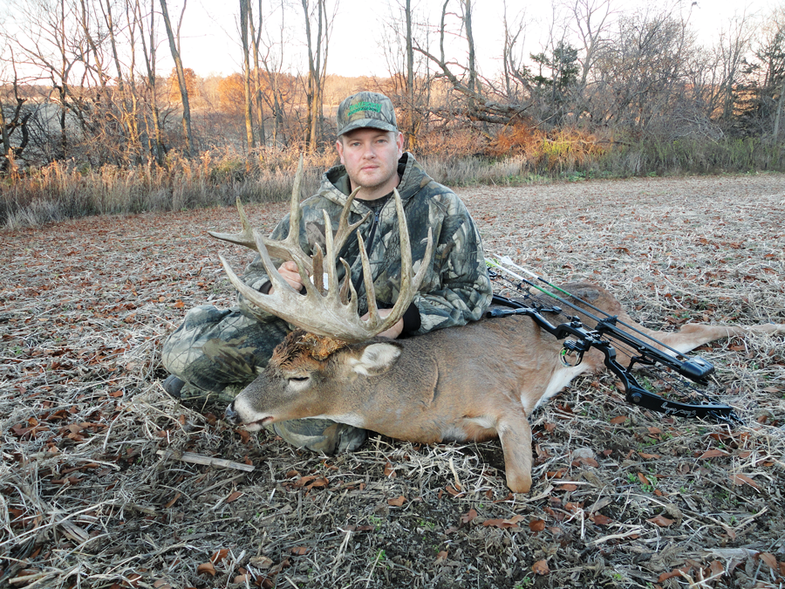 Just a couple of years ago, 37-year-old Ben Fein of Park View, Iowa, was feeling as if he had won the whitetail lottery. An admitted big-buck junkie, Fein was about to start a new job—one that would mean a move from Michigan to the trophy-rich state of Iowa.

But precisely how does a newcomer find a place to hunt in a state where leases lock up so many of the best properties?

“I had no choice but to hunt public land,” says Fein. “It’s not necessarily fun, but I spent hours studying maps, put a lot of miles on my boots, and fought mosquitoes and ticks to run a lot of trail cameras in the 100-degree heat of summer.”

Last summer, one particular 4,000- to 5,000-acre chunk of timber in south-central Iowa caught Fein’s eye, and by July 4 the time had come to get serious about scouting.

“I let the cameras soak for a while,” says Fein. “By the end of the month, a giant of a buck showed up. I waited another month and I had quite a few photos of him.”

Just as Fein’s anticipation grew, the oak ridge stand in the Iowa timber went cold—make that frigid. Through all of October, the buck never showed.

“Finally, on the morning of November 8, I was filming a doe that had lain down at the base of my tree, when I looked down the ridge and saw a deer coming toward me. He hit an opening at about 70 yards and I immediately recognized that he was the huge non-typical I had pictures of. He worked his way into my stand and began working a mock scrape I had made earlier in October. He turned broadside at 25 yards and I released my arrow. The shot was a bit back. I’d need to give the deer some time.”

After a night of restless sleep, Fein returned to the stand site.

“He’d only gone 150 yards. I couldn’t believe it. Truly the buck of 100 lifetimes, and to take him on public land with a bow is a dream come true.”

Fein’s buck dressed out at 180 pounds, had 19 scorable points, and netted 187 ½ inches as a Pope and Young non-typical.