Deer of the Year: The Record Walla-Walla Whitetail 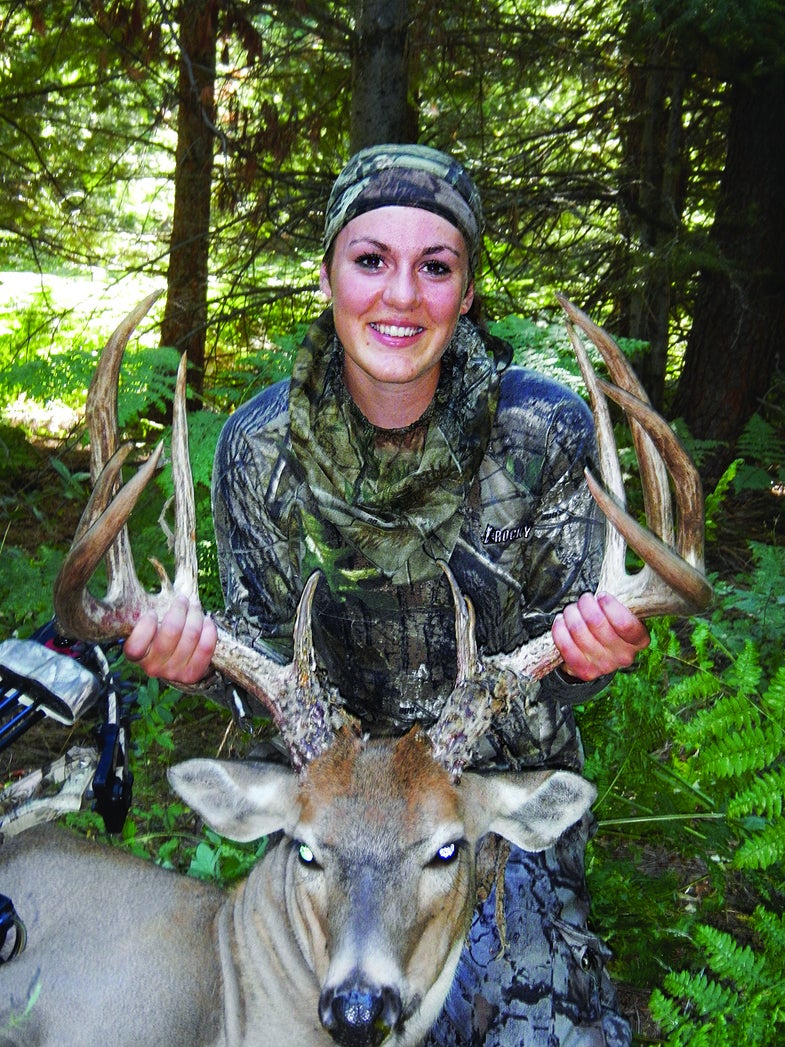 Kailey Smith was riding shotgun along through the woods in northeast Oregon when her uncle spotted a buck, just 20 yards away. The two were tracking elk across 5,000 acres of pristine, private timber property in the Walla Walla unit and had taken a midday break to reposition a few game cameras on Aug. 31, 2013.

Terry Blankenship brought the truck to a rolling stop and Smith, then 14, jumped to the ground. She crouched on the forest floor as her uncle drove out of sight, feeling unprepared and not knowing the buck’s position. “I’m standing in the middle of the road, flipping out,” Smith said, who was wearing bright pink running shoes and nothing over her face. “Then I saw his horns move.”

The buck’s head was turned. Smith nocked her arrow and centered her 20-yard pin over its lungs.

Meanwhile, Blankenship had parked 200 yards away over a ridge and backtracked on foot a little to watch the action from afar. “Just a few seconds after I got there I saw her rise up and come to full draw and let it go,” Blankenship said. “It was really fun. We’ve hunted so much together I just knew she was down there, heart pounding.”

Immediately after loosing her arrow Smith heard a loud thwack and her heart sank as she watched the buck turn tail. “I thought I hit a tree instead of him and I just felt so disappointed,” Smith said.

But when Blankenship arrived it didn’t take them long to find her broadhead some 30 yards off the road and coated in blood. Smith’s doubts vanished.

After a quick trip to their camp to collect knives for field dressing, Smith and Blankenship returned to pick up the blood trail. There wasn’t much to track at first, but they soon discovered bigger and bigger splashes. A few yards later Smith walked up on a patch of thick ferns. Balancing on her toes to see over the fronds, Smith spotted what she thought were antler tines.

Trying hard not to move too quickly, Smith and Blankenship stepped into the clearing. Her buck was lying out in the open, piled up about 40 yards from the road.

“I was super excited, because that was the first animal I’ve ever killed in my life and I was just thinking how huge he was,” Smith said. “He was big for the first one—I thought I was going to shoot something smaller.”

Blankenship said they knew the buck was in the area, and that they’d spotted him a couple years in a row. Not only was this buck Smith’s first-ever harvest, but at 178 6/8 inches, it also clinched the new Pope and Young state record for a typical whitetail.

“She got her first animal and I wasn’t right there. She had to kind make the play on her own,” Blankenship said. “That was the fun part of watching from afar. She’s a good hunter in her own right.”