Don’t Let a Big-Buck Photo Psych You Out

Two nights ago this buck showed up on the farm I’m going to hunt in western Illinois next month. He... 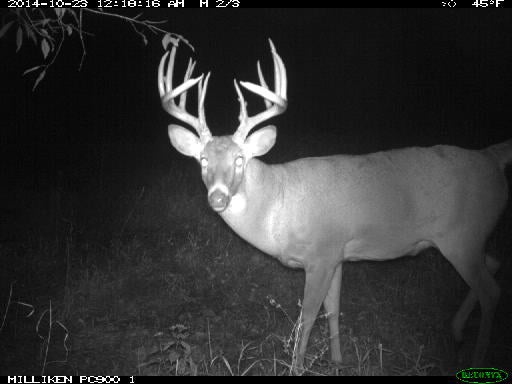 Two nights ago this buck showed up on the farm I’m going to hunt in western Illinois next month. He was up and moving late at night, checking a scrape that was made by a younger buck at the edge of an ag field.

Whitetail Properties land specialist Aaron Milliken emailed me the photo the next morning. All he wrote was “Holy SH*!”

I choked on my coffee when the picture was done loading.

It’s the first time this buck has shown up on trail camera and he’s the biggest buck we have photographed so far this year. If I’m lucky enough to shoot him, he’ll be the biggest buck I’ve ever killed…by a lot.

So, for the next week and a half I’m making it my mission to not let this buck picture psych me out. Milliken and I are set up on a perfect little farm, and we’ve got a good plan for the second week of November. There are a handful of nice bucks on the property that I’d be more than happy to hang my tag on, even after seeing a photo of this deer.

We are not going to name him.

It’s tempting to throw the whole game plan out the window and try to hunt this buck only. If we’re able to get more photos of this deer and figure out where he’s bedding, we might do just that. But for now I’m patiently waiting, trying hard to not look at this photo every 10 minutes.