On the dream side: Crisp dawns and dusks, warm days, and colorful leaves make for some mighty pleasant time afield.... 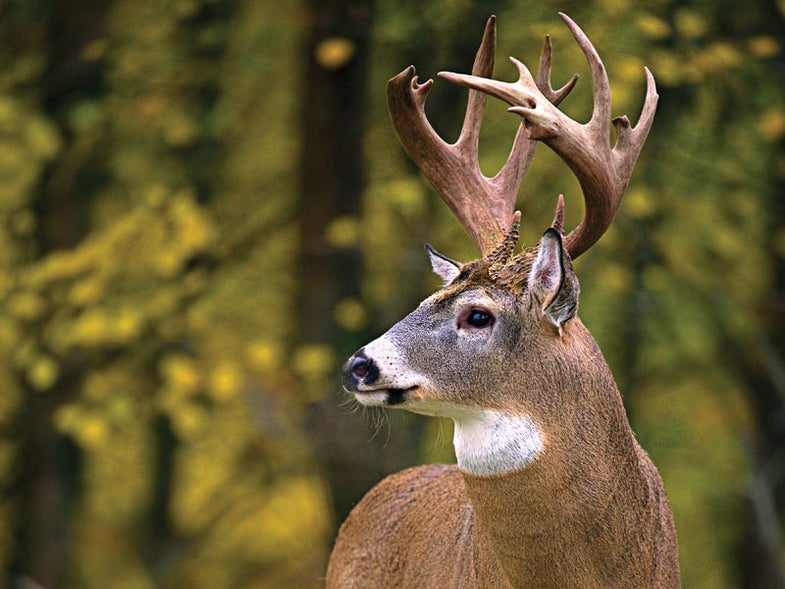 On the dream side: Crisp dawns and dusks, warm days, and colorful leaves make for some mighty pleasant time afield. On the dread side: It’s the whitetail archery season’s tweener time, when late-­summer patterns are over but the rut hasn’t yet kicked in. Even more significant, bluebird weather coupled with autumn’s bounty of forage—grains hardening, greens still available, and acorns dropping—means the deer are living easy and shifting their circuit on a daily basis.

But it’s a mistake to sit home and wait for colder weather and November’s rut; there are no guarantees then, either. So keep on task through the challenges of the early season with these five approaches for arrowing a warm-weather buck.

Bucks become primed to breed when they shed their velvet. That makes them vulnerable to estrous doe scent. As soon as you begin seeing bucks in hard antler, soak a rag in doe-in-heat scent and drag it to your stand, then put out a couple of scent bombs. It might seem premature, but bucks will check out the early invitation for a rendezvous.

In the same way bucks are interested in easy breeding now, they’re also beginning to get more aggressive, and they’re becoming interested in who else is bidding to rut in their neighborhood later this fall. Bring along a set of rattling antlers and make a little noise with them to pique the curiosity of local bucks. Don’t replicate an all-out brawl, but do mimic a shoving match.

Now is also a good time to get a little aggressive with visuals. Set up a decoy in an open area such as a hay field, food plot, or pasture. Although usually reserved for later in fall, when the rut is in full swing, a doe decoy can attract a buck’s attention now and persuade him to approach. Similarly, a young buck decoy can spark a buck’s ire and get him to sidle over to show off and try to establish some dominance.

If a stretch of hot and dry weather hits, head to water sources and hunt there. Ponds, ditches, and stock tanks in open areas probably won’t see daytime activity, so head for secluded woodland ponds, spring seeps, small creeks, and other hidden water sources surrounded by cover. Midmorning through midafternoon are prime times to hunt these undercover water holes.

Autumn’s abundant forage, along with mild weather conditions, means whitetails don’t have to work hard to stay well fed. That fact, coupled with some early-season bowhunting pressure, pushes the deer into a nocturnal pattern.

But if you can find an oak ridge or flat with a number of acorn-bearing trees, set up there for a daytime hunt. Some whitetails will feed there under cover at any time of day to stoke up and put on fat for the upcoming rut.