How to Dissect a Deer’s Rumen and Identify Top Food Sources, Pt. 2

A few blogs back I wrote that a little rumen analysis could be the difference between a successful hunt and... 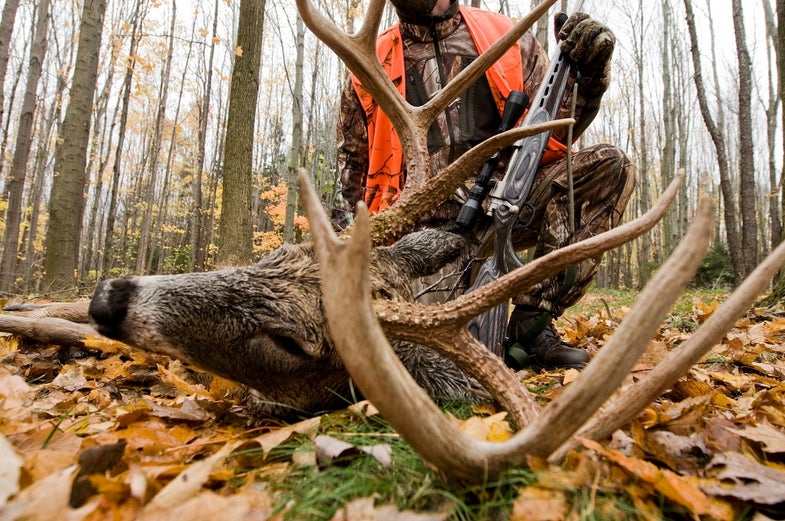 A few blogs back I wrote that a little rumen analysis could be the difference between a successful hunt and a bust. I got some responses (comments on the blog and emails), most of which were along the lines of: “ugh, I ain’t going in there” and “you’re crazy, I ain’t no biologist.” Seems I over estimated my readers’ taste for skinning shed forensics. Sorry about that, but it’s worth another try. There is a reason successful fishermen open up the first fish of the day.

So let’s give it another whirl and break it down so even a beginning field dresser can do it:

1) After you’ve finished gutting your deer, isolate the rumen from the other internal organs. It’s the big vein-wrapped, green-blue-gray organ that looks like a watermelon. Stay away from the intestines and any and all tubes

2) Get off to one side, puncture then slit it open. The off to one side part is to avoid any nasty junk which may blow out (from built up gas) of the initial incision.

3) Grab a cup or shovel and put a few cups of the goop in a dirt strainer (trappers use them) or course sieve (cooks use them).

5) Dump what remains on a clean surface and start pawing through it. Most likely you will find multiple foods.

That’s all there is to it, no fuss no muss. It’s best done in a skinning shed but can be pulled off in the field, too.

Take a Good Look: Take a gander at the picture above and start asking yourself some questions. Had this deer fed heavily lately? What foods had he fed on? What hadn’t he fed on? What is the nutritional composition of the foods he used and what, if anything, do they have in common? Was he a random sampler who just ate as he walked or was he or a purposeful feeder on a mission?

The Answers: This deer had been feeding heavily and recently. The rumen was almost completely full. This was a post-rut buck who was more interested in food than bothering does. The major foods recovered from his rumen were apple chunks, acorns, and corn kernels (in that order). There was little in the way of greens in the rumen. He was definitely a purposeful feeder (concentrate selector) who was focused on high energy, fat-producing, high-carbohydrate foods. Acorns and corn are high in starch and apples are loaded with sugar. He was looking to pack on the pounds (fat) before the winter months.

Supporting Observations: This buck was a rut weary warrior. His beat up body showed little if any fat reserves. The back and rump were devoid of fat — there was nothing under the hide but pink flesh, and little to no kidney fat.

The Big Picture
This buck may have fed all summer on protein-rich food plots, but right now he was all about regaining the 25 percent of his body weight he lost during the rut. The quickest way to pack on the pounds is by loading up with carbohydrates. It’s a safe bet that he is not the only buck in the woods trying to put the pounds back on. Smart hunters looking for a good buck will lay off the green plots and head for the acorns, apples, or cornfields. This feeding pattern will likely continue until the onset of winter.

So get out that blade, slip on the skinning glove and go to work. Five or 10 minutes in the skinning shed can be the difference between hunting where it’s hot and where it is not.