A Hunter’s Hard Choice to Follow a Blood Trail, or to Wait, and the Consequences

A decision. One is made during every blood trail a hunter takes up. To carry on? To stop? To veer... 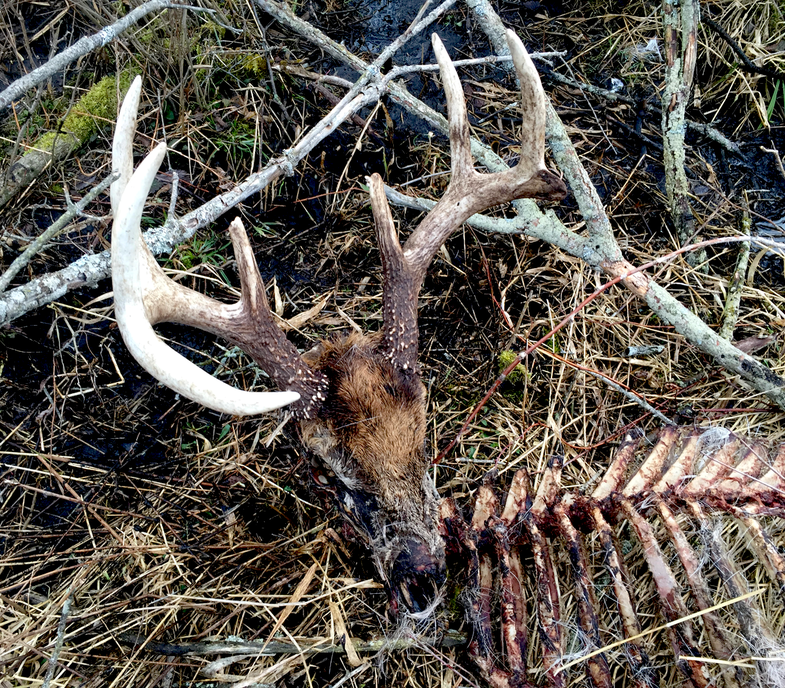 One is made during every blood trail a hunter takes up.

To carry on? To stop? To veer right? To stay left?

Three days earlier, a buck I had hunted for three seasons did the wrong thing. It was the same thing it had done the previous year, but this time the safety was off.

The buck was a solid 10-point the year before. It looked to be at least three years old, probably four based on past trail camera images and video. I passed on the shot, hoping its next set of antlers would be a bit better than the ones it wore.

They weren’t. The buck showed up again, this year wearing a smaller set of antlers from the year before, and with one less point. But it was clear the 9-point was the 10 from the previous season. Knowing the deer was fully mature and at full potential, it was time to kill it.

The buck was a survivor. Or at least smart enough to know where it couldn’t walk during Michigan’s gun season. Just as it had the year before, the buck showed up after gun season was over, when muzzleloader season was underway.

I watched the buck enter the cut soybean field — and noticed he had managed to break off a portion of his right beam — and knew the stage was set.

Two days later, the buck walked in front of a gun again.

The shot was taken at 74 yards, and the buck went down like the sun. Then the smoke cleared. The bullet had hit where it needed to east and west. But it was too far north.

A 300-grain bullet delivers a helluva jar to the nervous system of a whitetail. It will collapse. It will lay there for a bit. But it won’t die from that shot.

So a second shot was sent. In the chaos and the rush, it too failed to hit where it should have. No third shot was taken before the buck was on its feet and barreling for the sanctuary.

I hunt in southern Michigan, home to hundreds of thousands of deer hunters. Seeing a buck that’s lived past three years of age is a rarity. I’ve killed a handful of them, including one that was six years of age.

The reason I’m hunting bucks that are old is simple: They survive. They survive because they’re given a sanctuary area. A nasty piece of cover that I never step foot in. Ever. Neighboring hunters try. They line up on the fencelines and I can see a shooting house or treestand from just about any place that I stand.

But I’m an absolutist. A sanctuary is only a sanctuary until you make it something else.

So, with light fading fast, the field where the buck was shot was checked for blood. There were several spots the size of saucers where it had thrashed before gaining its feet. Heavy hooves marked the mud into the treeline. Some 80 yards behind was the sanctuary’s edge.

During the midday hours, I walked every trail leading to and from the sanctuary. I found four drops of blood. Despite looking at a time when I figured few hunters would be out, I could hear deer crashing out of the sanctuary, and the shots that rang out as they went.

The hunt, and the not-quite-right shots were captured on video and I watched the footage over and over. And over again. I shared it with the best hunters that I know – and I’m lucky to know some good ones. Each had a slightly different version of the same conclusion.

The shots didn’t appear lethal but they agreed that the deer was in a bad way.

After three days, I had found no more blood. No more sign. I had exhausted every option. Save one. I could walk the sanctuary.

Every blood trail requires a decision: To push forward. To stop.

The snow is finally gone. Spring, while not quite here, is threatening to make an appearance.

Less than 10 minutes into the search, my buddy Duane makes the discovery. I take one look at the broken beam and know what deer it is. Where the antlers are laying makes the find all the more upsetting.

I never saw the buck alive again. In my heart, I suppose I knew what that meant. It’s hard to explain this feeling as I look at that pile of scattered bones, bits of hide.

Because it was my son Noah who was the one pulling that trigger that December day.

That buck in the weeds is his.

After first seeing the buck in early October – during my first sit of the bow season – I had elected to pass on a 12-yard shot. The buck wasn’t mine to take. He was fully mature and I wanted Noah to kill him.

Noah’s a terrific shot, much better than me. I can’t explain what happened that day. The shots simply went a bit too high and the situation went wrong in ways that a dad who makes a living in the woods should have been able to correct.

I tell myself that I made every possible effort to recover that buck and I know that I did far more than many would. But the fact remains: I didn’t enter the sanctuary. Nothing in the sign or the video told me that I should. And yet the buck was 10 steps from where I’d stopped.

I have no idea if that buck was lying there dead when I was searching or if by some stroke of cruel chance it laid down there at a later time and passed.

Sharing this tale required a decision as well.

I know that I’m opening myself up to negative comments, that the keyboard cowboys will be quick to pounce. I suppose part of me welcomes the criticism. It will be easy to absorb compared to the thoughts that filled my head as I carry the buck’s skull out of the woods.

The failure was not his; it was mine. Since finding that rack, I’ve asked myself the same question that I now put to you: What would you have done differently?