I’m not hunting small this week. Or, perhaps, I am. I’m in South Dakota and doing a couple of things... 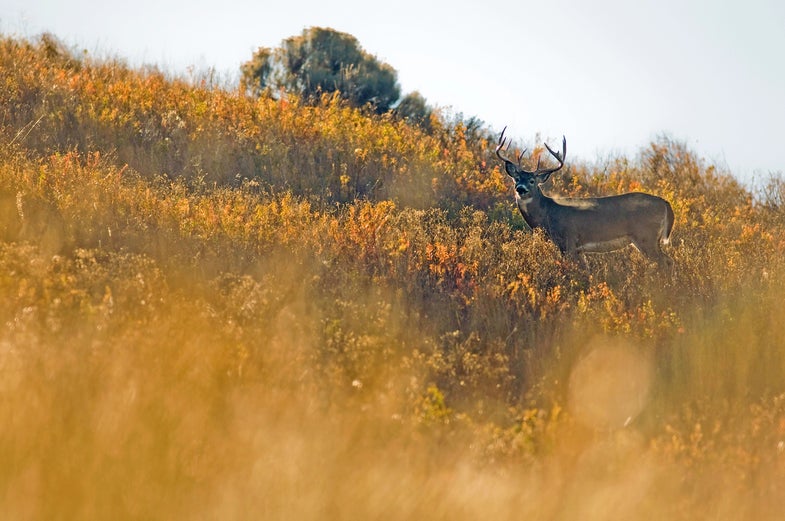 I’m not hunting small this week. Or, perhaps, I am.

I’m in South Dakota and doing a couple of things that are pretty foreign to me.

For starters, I’m hunting with an outfitter. The hunt is taking place at Western Ranch Outfitters in the western part of the state. I’m here on invitation from the folks at Field&Stream brand to showcase some of their hunting gear.

I’ve not hunted much with outfitters and I’ve never been on one of these “writer hunts” – though I’ve heard about them often.

I’m also hunting more prime land than I’ve ever looked at in my life. And, man, it’s a strange deal.

Last evening, I was posted inside of a bale-style ground blind. The guide had seen several good deer using the expansive alfalfa field where the blind was positioned in recent days but the wind direction didn’t allow for treestand use … and it was blowing about 40 miles an hour.

The deer moved early. And the first two deer I saw were a pair of stud bucks including a 5×5 typical that had tines that touched the sky.

The problem? The buck was content to occupy an area roughly 50 yards square. It fed, milled around and bedded three times over the course of five hours. It never left that small chunk of real estate.

I found that a bit comical. Here I am hunting a big property and the type of buck that graces magazine covers covered but 1/8th of an acre of it.
What’s this have to do with hunting small parcels? Everything.

I’ve been asked before why I don’t participate in more writer hunts, why I don’t hunt more often with outfitters. After all, I’m an outdoors writer so surely I must have all manner of freebies and benefits at my disposal, right?
Well, not exactly.

Yes, my job has its perks. And my South Dakota experience is one of them. But I’m not a big deal. And, believe it or not, my hunting options probably look pretty similar to yours. Public land, small pieces of private ground hunted with permission.

The bottom line is this: I find that I’m a more effective hunter when I focus on small hunting areas. And I do that even if I have large acreages available.

The South Dakota hunt is a good example of this concept.

The property I was hunting was big. I have no idea how big exactly as it’s not “my” ground. But the portion I hunted contained roughly 300 acres. The blind was located in a manner that it was covering roughly 10 acres of it. It was in a great spot and the deer were definitely there.

The buck I saw was right there – but he used just a fraction of the area.
Think about your stand locations. How much area can you truly and effectively cover from each spot? For me, it’s a circle of about 50 yards around the stand. I am generally placing my stands to take advantage of some sort of terrain feature or movement-focusing scenario. So I might be looking at an impact area of an acre or so.

So does it truly matter if I have 1,000 acres to hunt? Not really because I can’t cover all of it anyway.

Sure, having access to that much ground does give me more single acres to choose from. There’s no denying that. But the fact that a hunting property is small – very small in some cases – does not mean it’s a non-productive option.

What truly matters is just how much potential for deer activity is contained within that single acre.

I hunt a fair amount of public land each fall. Some public areas contain thousands of acres. The task of figuring out how to scout and research an area that big in a limited amount of time is daunting. But I always take the same approach: I digest it one bite at a time.

My goal is not to hunt thousands of acres. It’s to hunt the “right” acre.
One of my favorite stand locations is located in a piece of Iowa state forest that covers nearly 3,000 acres. It sits on a hillside and has visibility of about 100 yards in all directions.

It’s the only spot I’ll hunt there. Despite that fact that the public area is much, much larger, the property I hunt within that area is very small.

Now let’s flip that scenario a bit. Say my neighbors own 2999 acres and I own one. I’m cool with that. So long as the acre I own is the right one.

Obviously, owning and controlling the hunting pressure and tactics on a large chunk of land can lead to phenomenal hunting. There’s no denying that, but so many hunters discount a property’s potential based solely on its size.
But it’s not the size of the property that should be considered first. It’s the potential within.

One acre or 1,000, it still comes down to this: You can only hunt so much ground at one time and you simply can’t cover much of it at once. So choose that spot based on potential for production and not on size alone.